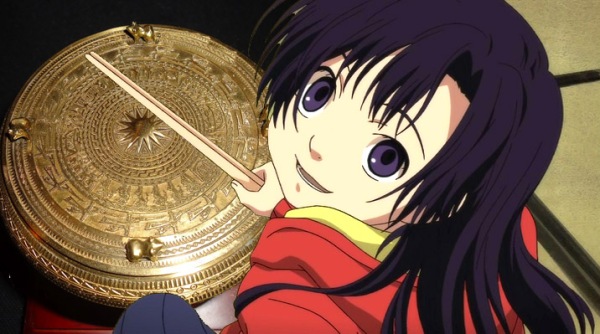 …OK, so I’m not a drummer girl.  Actually, if Pete, the drummer of my band heard me calling myself a Drummer Girl, he’d laugh is head off.  I suck at timing.

No.  I really suck at timing.  I don’t care, though.  I like to bang on drums and congas and all my other percussion instruments.  I may not be talented, but I am enthusiastic.

My people are enthusiastic drummers as well.  We have been creating beautiful bronze drums for thousands of years (among other things).  What we have behind glass and on stands in the museums don’t even come close to what we did create back in those days.  It has all been ransacked and taken so not much is still left to be seen, I know that.  I know that we don’t have much in terms of archaeological artifacts to share with the world, that would be recognized as purely Vietnamese.

I get that, compared to other cultures, we barely have anything that would be considered of historical significance to anyone any more.

This makes the little that we have even more astonishing in its singularity.

How can a civilization create something so profoundly meaningful, so artistically precise, so technologically advanced for the time, and yet have absolutely no other found artifacts that would suggest a rich cultural heritage?

We have no evidence of other types of archaeological finds, no huge monuments, no ancient temples, no enormous pyramids or megalithic stone temples.

All we have are these old drums and some old myths and legends.

Having said that, we have quite a few of these old drums.  To date, there are approximately around 960 bronze drums that have been found in Vietnam alone, and of those drums, 540 belong to the “Đông Sơn” classfication.

I wrote about it in one of my previous posts, Ancient Việt Dynasty, where I outlined the usage of the drum as a calendar.  In this post, I will go into detail about the various types of drums that were found all over Vietnam as well as the symbolism and the clues that tie the drums to the I Ching.

There are several types of drums.  They are differentiated by the designs on the drum face as well as by size.  They are:  Ngọc Lũ Drum, Hoàng Hạ Drum, Cổ Loa Drum, Chợ Bờ Drum, Sông Đà Drum, and Quảng Xương Drum.  These drums are part of a panoply of Trống đồng Đông Sơn (Dong Son drums) that date back to the Hùng Vương kings circa 2800 BC.

The Ngọc Lũ Drum is perhaps the finest example of my people’s bronze drums.  Its quality of construction is superb, indicating a high level of bronze-work thousands of years ago.  It has a circumference of 79 cm and is 63 cm tall.  For all non-metric folks, that’s a little over 2 feet tall and about 2 feet 7 inches in circumference.  It is also covered in a patina of dull greenish bronze, indicative of its great age.

This drum was discovered  in Hà Nam province back in 1893 by two men, Nguyễn Văn Y and Nguyễn Văn Túc, along with a team of their workers who were digging a ditch for the farming community.  Spring planting means ditch digging.  This allowed for irrigation water to flow in the direction that it needed to go so that it could be equally distributed amongst the rows of newly planted seedlings.  It was back-breaking labor but it was honest work, and one that they were used to.

The Ngọc Lũ Drum, even dirt-logged and oxidized as it had been, was a thing of obvious beauty and value, and the men who rediscovered it knew that their ancestors had hidden it underground to protect it from being systematically destroyed.  The Great Bronze Melting during the occupation of Ma is very well-documented.  The men knew that this was a part of their ancient heritage, kept safe for them, under the ground where it could be hidden from plunderers and the ravages of time.

Since they wanted to share this historic heritage with their community, they took the drum to their community center which was located in Ngọc Lũ, a tiny village in Hà Nam province.  Their intent was for the drum to be played during the great ceremonies of various important dates and events, as it had been for thousands of years in the past.  This was what it was originally created for, and what it should have been used for.  This was its primary function for about seven or eight years while it was still in the care of the Ngọc Lũ community.

Unfortunately, a visiting French dignitary came one fateful day, saw the drum, and immediately called the province officials to report on what he thought was an atrocity.  In his mind, the people were beating upon a priceless artifact of antiquity, something that needed to be protected inside a museum, not left unattended inside a village community center to be regularly beaten upon.  This French dignitary recognized the value of the artifact and wanted the drum at any cost.  He managed to convince the officials of Hà Nam province that it had to be taken out of the small village community, but to come and seize it by force was not in the best interest of anybody, so they created a bidding war.  Whoever bid the highest for the item would own the piece outright.

The villagers did not want to lose their drum.  This was a valuable heritage that their ancestors had tried to protect and to pass down to their progeny.  It would be a horrible crime to lose it yet a second time.

But they had no chance and no say-so in the matter.  They were a poor community, and unable to come up with the large amount of money that was required to keep the drum, they lost possession of it to the officials in Hà Nam province on November 11, 1902.

Once it was in the hands of the province officials, an entity named Viện Viễn Đông Bác cổ or The French Institute of Eastern Archaeology (École française d’Extrême-Orient) purchased it from them for $550 đồng (that’s 3 cents in USA currency today).  It basically passed into the hands of the French people, and there it remained until 1954 when the Geneva Convention occurred.  To this day, the French still possess an inordinate amount of ancient Vietnamese cultural heritage items that had been taken and then transported back to France, but that’s another post for another day.

The Ngọc Lũ Drum is now on display at the Museum of Vietnamese History in Hà Nội.  I have been to Hà Nội four times, but have never managed to go there.  It is one of those strange sad situations that occur when one finds oneself in such a fascinating place.  There is far, far more places and things to see than one has time scheduled into the day to see it.

The Hoàng Hạ Drum is slightly different from the Ngọc Lũ Drum in that there are 16 points to the center star instead of 14 points.  There are also slightly different patterns, designs, and animals on the drum face, but its purpose and design came from the same manufacturing process of the Đông Sơn community of the ancient Vietnamese.

This drum was discovered on July 13, 1937 by a group of workers digging trenches to divert water from the northern province down towards Hà Đông, which is now current-day Hà Nội.  Since trenches are shallow, it was quite a lucky find due to the fact that the drum was barely 3 feet underground.

It was obviously meant to have been a quick and temporary hiding spot, placed there to be retrieved at a point in time when it would be deemed safe to do so.  Unfortunately, whoever placed it there out of harm’s way must have quickly met up with misfortune and had gone to the grave before they were able to reveal its location.

Not much more is known about its history, but it is also now on display at the Museum of Vietnamese History in Hà Nội. 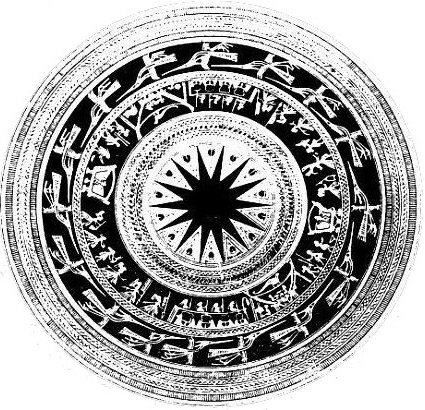 The Cổ Loa Drum is an example of what a Đông Sơn drum looks like when it has not been protected underneath the ground.  After years of exposure to the elements and the ravages, it has suffered a fair amount of damage.  Yet, the images on the drum top is still visible and unique enough for it to be classified as a different style of Đông Sơn drum.

The Sông Đà Drum is another 14 point star drum.  It is slightly different from the other drums, mainly of its depictions of the various birds and animals on its face. 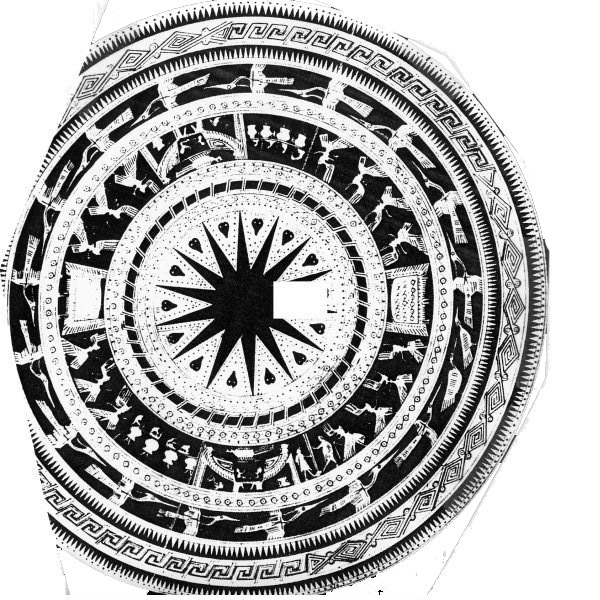 There are brackets at the neck area of the drum, and its shape is more proportionately hourglass than some of the other drums. 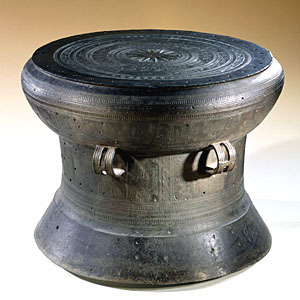 The drum face is exquisite in craftsmanship.  Its various depictions of animals and people, cryptic and containing various facets of hidden symbolism which we have yet to fully uncover.

Quite unlike the other drums, this type of drum comprises of only two parts (instead of three) and also has frogs perching on the rim of the drum head.  There can be four to six frogs, and the images can vary from drum to drum. 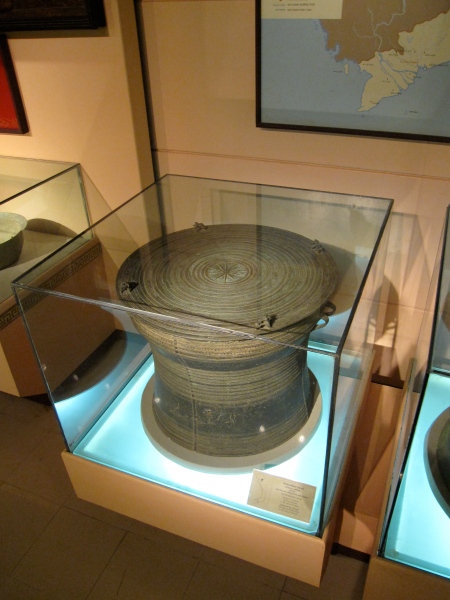 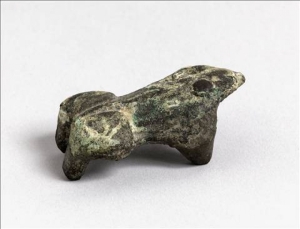 This is a closeup of one of the frogs that were fused to the top of the Chợ Bờ drum. This type of drum was developed later than previous bronze drums, roughly between the 4th century B.C. and 1stcentury A.D.

Since frogs emerge during rain, and rain usually leads to good harvests, this drum was most probably used to predict times of planting as well as to request opportunistic rainfall.

When the drums are beaten during festivals and the various holidays, the sound is said to resemble the rumbling sounds of thunder.  With the frogs present, it is a plea for ask for rainfall, which brings with it, a bountiful harvest. 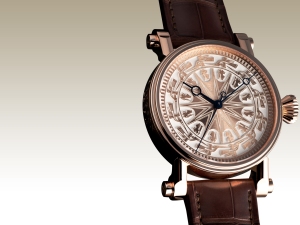 As I was doing research into the wonderful world of the ancient drums, I happened across a website of a Swiss watchmaker, Speake Marin, who created a commissioned piece just last year, that featured the Đông Sơn drum face on its watch face.

I searched all over the internet for a website that would feature the watch for sale, but sadly, since there are only 18 of these watches created, I do not think it is even available for purchase at any price.

Whatever.  It still looks awesome.