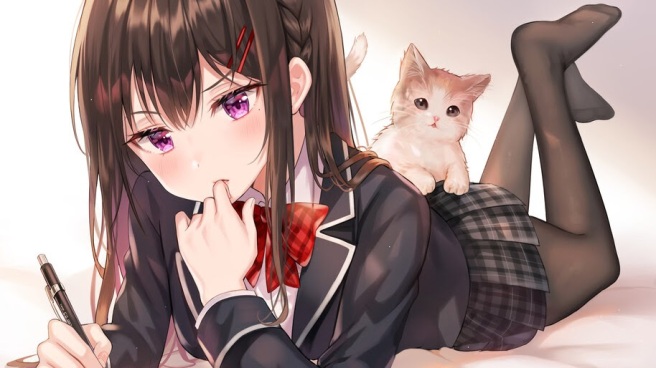 We modern people are not the only ones who know that the written word is extremely powerful.  People in ancient days also understood this very well.

For a not-so-ancient Taobabe, whether words are written in my native language Vietnamese, or in my third language, English, doesn’t really matter.  They are all powerful, not because of the letters themselves, but because of the meanings that the words convey. 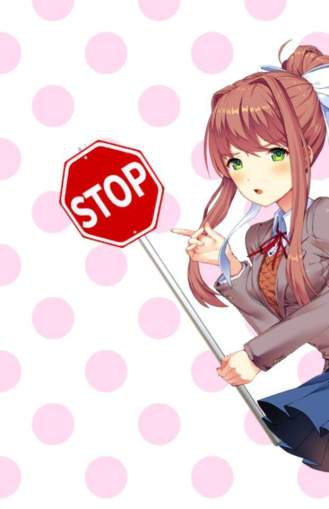 How powerful are words?

For those who understand the power behind the written words, it hardly takes any convincing.  It is generally accepted that power words make up power documents—the Magna Carta, the Declaration of Independence, world bibles and prayer books.

Even road signs that say STOP!  They are so powerful that inanimate objects like cars will blindly obey without question, at every corner of every roadway that this STOP sign can be found.

We all understand that words convey ideas, which are what hold the bulk of the power.  This power is then transferred to the various entities that are within the immediate surroundings, and their belief in the power of the words is what gives the word(s) its power.

But what if those words are written in a foreign language?  What if it’s written in a dead (or lost) language?  If you can’t read the words and don’t know what it means, it’s just some squiggles that you have been told, hold some mystical virtue ascribed to magic and the supernatural.  After being told for thousands of years that spells hold indescribable power, the squiggles and odd characters suddenly take on a life of their own, and power is infused into them by sheer mental energies of those who believe that the power exists.

This was how spells were invented.

Deconstruction of the Spell 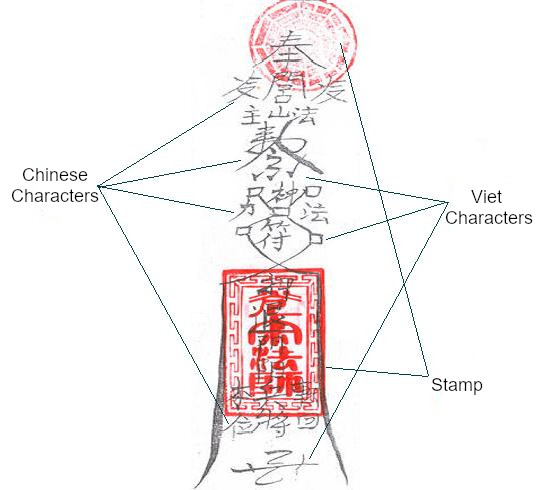 Here is a random typical spell taken from one of my spell collections.  It is broken down into 3 different parts.  The first part is the Sanskrit (or in this case, Chinese) characters.  The second part is the Vietnamese ancient characters.  And last but not least, the red seals of the organization and the signature stamp of the person writing the bùa (spell).

Before I get into the actual words themselves, I need to touch briefly upon the paper with which it is written.  Because let’s face it.

The image on the left, which I photo-shopped onto official looking yellow bùa paper, just looks so much better than the same exact spell placed on the notebook paper on the right.

OK so now that we have established that to win the hearts of man, you have to get the official yellow paper rather than make do with basic notebook paper.  Next is the red color of the stamp.  Before you go off on me and say that the ancient people used red because that’s what they had, allow me to remind you that they had access to just about any color you can imagine.

Red though, looks official.  It’s what you would see on official documents back in the day when an emperor could send entire armies marching with just the one scroll of official paper with his red stamp on it. The bùa also needs to look official in order to garner the seriousness and command that a spell should have.

Now, the Spell Master can do one of several things.  He can use the language that he is familiar with to write these words, like Chinese Han characters or Sanskrit. Or he can copy them, as they are written in whatever lost or dead language they were originally written.

Why these words?  Most Spell Masters come out of Buddhist temples and the likes, and they usually have to  master one of the several languages used in the holy scriptures and kinh or mantra prayer books in order to read them.  They will also have access to ancient scripts that are thought to be powerful spells for various things.

Regardless of the writing choices, it will look more mystifying than simply writing everything out in alpha-numeric  long hand.  The words themselves can be anything really.  Mostly, the Spell Master will ask you for your name and birth date, and that’s what he will write somewhere on the paper, and then he will draw a few squiggles to make it look more spell-like.

He may also write a few power characters, like FIRE, or THUNDER, or LAKE, or MOUNTAIN that might help address the situation.  For example, if he wanted to cremate a soul to cleanse it, he would write the word FIRE on the spell.  If he wanted to scare the soul, he would use the word THUNDER.  Sound familiar?  That’s because those words come from the I Ching.  Remember this?

Any serious student of the Tao would be very familiar with the characters for Heaven, Earth, Fire, Water, Wind, Thunder, Mountain, Lake.  These are the I Ching gotta-know basics.

Quite often, there will also be parts of a well-known mantra or liturgy, like the Aṣṭasāhasrikā Prajñāpāramitā (aka Heart Sutra).  This type of sutra is well-known for its protective energies and is quite often used at exorcisms and other such activities requiring protection (more on this later).  It also helps that the Sanskrit words look mystical and very cool, when drawn with squiggles and circles surrounding it.

And then, there will often be pictographs or very basic drawings, which denote the fact that pictures are parts of power spells too.  For example, here is a compatibility spell that I got from UHN.  Top portion is just the rough sketch of two people.

Notice the ‘power’ portion of the spell is where you would normally place your signature seal.  It’s the same idea as a command scroll coming from the emperor.  If it’s missing the emperor’s red seal, it is just a piece of paper and has no power of command.

Here is a spell I created today to explain the various parts.  Also, it’s fun to look at.  On the top of the bùa, I have my stamp.  Since I’m a Taoist, and I like cats, I made a Tao cat stamp.  Then I grabbed a spell from one I found in my stash and altered it a bit.  Since I like flowers, I added four of them onto the hands of the people in the characters.  At the bottom is my seal.

As you can see, the pink words reflect my love for the color pink.  Flowers convey beauty and the vessels that carry seeds, the beginnings of life.  Cats are just fun creatures that give the ultra serious tao symbol a cheerful and whimsical touch.

The square seal is one that I threw together on the spur of the moment.  I’m sure I could create one that is a bit more serious, but for the purpose of this exercise, it’s good enough. 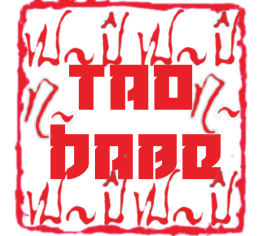 The seal itself is made with my pen name in the middle.  It’s actually readable since it’s just TAO BABE written in a fancy script.

Then, I added my first name ‘Mai’ written in ancient Viet Tadpole script on the four corners of the seal.

And finally, the two little symbols that are on either side, in the middle, is just the verb ‘is’.

So the seal reads Mai is Tao Babe.  How cool is that.