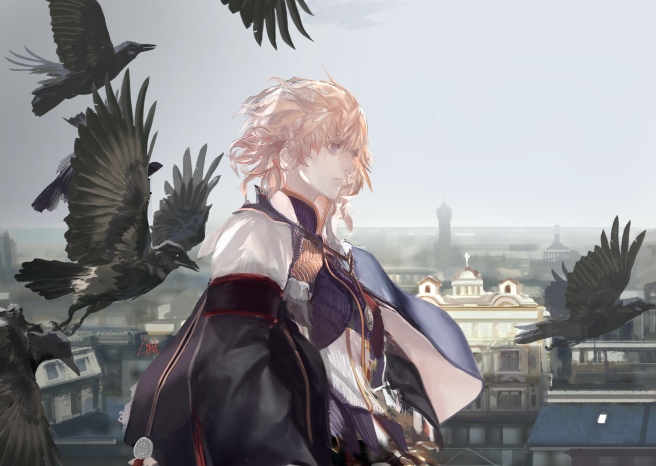 If there is one thing you should never do, it would be to piss off a crow.  Damn bloody birds are some of the smartest animals alive on this planet (collectively-speaking that is) and I’m not exaggerating even a little bit.

Think back on the last time you were able to zero in on the face of a person you have never met, a person who killed the relative, of a relative, of a relative–and you knew exactly who he was without having ever met him.  You would then be able to pick his face out with deadly accuracy, from a crowd of millions of other people.  And then, with the collective might of hundreds of others of your kind–those who have also NEVER SEEN this person before–in justifiable rage, you were able to go at him, enforce.

According to a study done by biologists at the University of Washington, as published in November 2012 from the website of the National Wildlife Association, they most certainly are able to do this, and much, much more. [1]

Of course, we, as humans wouldn’t be able to do such a thing.  You see, we’re (mostly) not tapped into that Collective Consciousness Connection that the crows seem to be able to do, as a matter of course.

Now, don’t get me wrong.  I’m not saying we don’t have a tether to this Consciousness.  I’m not even saying that our tether has been severed.  It is, in fact, within a region of our body that is very tough to reach without having to go through drastic measures.

I’m just saying that for most of us, the next Warriors game is a much more vital, must-not-miss event, as opposed to that vastly more ethereal and vague experience of connecting to the Collective Consciousness.  After all, real life is real.  That mumbo jumbo stuff is for the crows, right?

As such, for the crows, the practice of what I like to call Collective Consciousness Connection (CCC) is hardly trivial and never vague.  (And before you give me a dirty look, I will confess that, no there is no such terminology out there, and yes, I just made up another phrase-noun.)  In any case, the crows could give a rat’s ass about a Warriors game.  To them, the survival of their crow family is of the utmost importance, and when they find you, oh pitiable one; you, who have done grievous harm to their compatriot, they will collectively swarm you.

They don’t call ’em a murder of crows for nothing.

This animalistic Collective Consciousness is not solely owned by the crows, however.  In the 1950s, another scientific study of snow monkeys living in Japan showed the same practice of animalistic CCC. [2]

In this study, it showed a correlation between a tipping point, whereby there had to be a build up of enough monkeys that knew how to wash sweet potatoes in the water to get rid of sand, and suddenly, all the monkeys living on other islands could do it too, via this same CCC even though they had no contact with the group of monkeys that were being studied.  It was as if they had tapped into a monkey CCC and there were enough of those who knew the trick so that the knowledge was somehow promulgated into other groups of monkeys that had never seen it being done.

Of course, there were a few written pieces of debunk for this theory, but the debunking evidence they offer is scant, and hardly conclusive, whereas the snow monkey study, done within a period of over 30 years, was exhaustively documented.

Personally, I do not believe that crows are the only animals that are able to tap into the CCC.  The study showed that monkeys were also able to tap into this CCC.  It also explains how bees and ants and shoaling/schooling fish behave as a collective single unit…indeed, all animals that make up pack groups behave in this fashion.  Heck, even my dogs do this.  I know because I observe them talking to each other without audible means.

I find this idea of a group of individual living beings, all working as a single unit, to be incredulous and, at the same time, obvious.  The duality of the nature of a collective singularity fits with elegance and finesse, in the same fashion that everything manifests itself to be both Yin and Yang.  The Tao is everywhere.  It’s the pattern of how the universe unfolds itself–a singular, finite being, composed of infinite fractal holograms of itself.

This CCC is also present in humans even though we all fight tooth and nail to look the other way and pretend it does not exist.  It exists even if we don’t know that it exists. It shows its tracks in situations where fifty-two different people invented the typewriter, all at roughly the same time.  The same situation occurred with the automobile, telephone, and telegraph  There were multiple inventors who came out at the same time with those inventions as well.

It’s as if we all get the information once it floods into our Collective Consciousness.  All we ever needed to do was to connect ourselves into the CCC and download the knowledge (I will do a more thorough treatment on the human CCC in a future posting).  What we do next with this knowledge is, of course, up to us, as individuals.

As an individual, every time I tap into the CCC, my brain struggles with the effort of holding onto the download and I start to forget the mundane things that make up this world because my mind is so full of information.

It’s crazy, and nobody believes me, but that’s what happens, and why I sometimes forget simple words for everyday objects and have to think about it for awhile to come up with the word.  I am a wordsmith.  I craft my works of art with words, so this is a major detrimental blow to my everyday creative existence.

But I don’t curse my new affliction. It is a trade-off, in that I am able to understand more complex ideas because of the downloads; and so I walk around thinking to myself, there has to be a reason why I’ve been pulling this stuff out of the atmosphere.  I’m supposed to do something with this, but for the life of me, I have no idea what I’m supposed to do.

The Old Dude in my dream keeps telling me just to hang loose, do the things I normally do, and don’t stress too much about what I’m suppose to be doing.  According to him, in being alive, I am doing something vital.

This has been hard for me to accept because I am a person who likes to actively create the changes within and around myself.  It’s frustrating to be told to simply live and enjoy my life, and not to worry about doing anything overt simply because I feel as if I should be doing something to increase the process of human enlightenment.

I have been told firmly that by doing nothing, I was doing something critical.

This has to do with the reality-creation process.  As a little godling, I am able to affect the world around me, but to change the world, there needs to be a consensus from other godlings, convinced about the truth for that specific change wavelength.  The thought processes must change from one set of entrenched pattern to another.

However, there are over seven-billion of us.  To change such a massive number of humans, there has to be enough of the godlings who have embraced the changes to feed their wavelengths into the CCC and broadcast their truths.  When there is enough of us, all doing the same thing, we reach a critical mass.   This critical mass is called the Tipping Point.

In physics, the Tipping Point is referred to the practice of adding a small amount of weight to a balanced object until the additional weight caused the object to suddenly and completely topple, or tip.  For this purpose, you can think of a Tipping Point as a point in time when enough of a group of a specific collective has amassed a certain adaptation, or behavior, or thought pattern, so that rapid and successive spurts, dramatically change the group’s identity and makeup.  This change can be metamorphic or behavioral, and it can also be physical or mental, but its main hallmark is always a widely adoption by the collective majority, of a previously rare practice.  [3]

To make a significant change and development in the collective human consciousness, the most effective method to reach the Tipping Point is to create a network of ‘towers’ that all broadcast the same wavelength into the CCC.  Those who are charged with being a ‘tower’ needn’t do much more than simply be alive to hold up the gridwork and transfer the pulses of energy that represent the new reality, so that it can spread far and wide.  Eventually, their very existences, pinging back and forth from this reality into the quantum CCC, become the catalyst by which the truth is promulgated.

Old Dude has told me several times within the last few years that my mission for the near future is to be a tower.

Stay put and hold up the grid, he says.

[1]  Crows Can Distinguish Face In a Crowd

14 thoughts on “On the Confluence of Crows and Monkeys”