(…continued from The Signature of a Rock Star)

If I were a goddess (or superhero)  who could choose her own powers, I would want to be the Frequency Goddess—able to manipulate resonant frequencies and move the hearts, minds, and bodies of all those around me.  My weapon of choice would be a cool looking guitar, hooked up to some killer amps.  I would shred the hell out of hell.  I would scream my lungs out in a perfectly pitched vocal stream-of-consciousness, and from my guitar, I would send powerful waves reverberating through the universe!

ALL HAIL THE MIGHTY FREQUENCY GODDESS!!!

As a goddess, I would need to cultivate a powerful image of my awe-inspiring strength and prowess.  I would have to look the part.  After all, even saints need a halo around their heads to be identifiable amongst the normal riff-raff—-so too must a goddess.  Glamour is a very important part of godhoodedness.  Nobody wants to see an ordinary, run-of-the-mill, lazy bum goddess, doing her normal thing and living a normal life.  Everybody wants to see that big-screen image of the beautiful and the powerful superhero, with rays of light emanating from her body.  I would need to project the ultimate image of coolness to the world, so that image would be preserved to maintain the glow of godhood.

In reality, looking and acting cool all the time leaves one with very little time and energy to do the real superhero/godly work.  To be a more effect Frequency Goddess, I would probably have to look more like this: 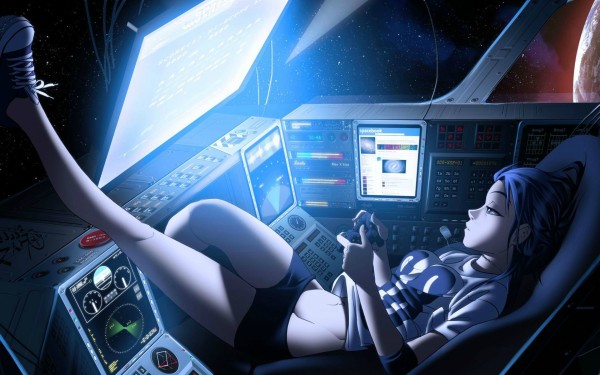 …which is hilarious considering I’m staring at a computer screen all day long as I do my research and my writing.

In any case, the most expedient method of controlling frequency would be via a powerful computer which would be in direct communication with various frequency stations.  In this manner, all the various absolutely monotonous and mind-numbingly dull methods and maintenances of frequency control would be relegated to a super-computer, one who does not need to eat, sleep, or go potty.  With all the boring details attended to by the ever-efficient binary mind, this Frequency Goddess can go do her nails and hair to look the part of the glamorous superhero that she is.

The powers of a Frequency Goddess would encompass the entire bandwidth of frequencies.  What kind of goddess would I be if I could only handle ones that could be heard or seen?  However, I wouldn’t need to manipulate ALL the frequencies all the time.  That would be overkill and so very elementary.  After all, every single problem does not need to be pounded by a hammer.  The power of a goddess is refined and finely tuned, and she would expend only the necessary amount of energy to finish the job—no more, no less.

For most jobs, I would only transmit at frequencies between five and fifteen cycles per second, and I wouldn’t have to be any more accurate than to three decimal places.

If I were familiar with the principles of the Tao (which, by this point in my evolution towards godhood, I will have grasped with a certain degree of aptitude—or in other word, eptitude, from which I would be heaped upon, all manners of vulgarity for having used a word that does not exist), I would understand how the yin and the yang work in relationship with each other.  I would utilize the raw energies all around me and manipulate them at will, and the closest source of energy would be the world that I find myself standing on—Mother Earth.  Let me tell you something brother, the man who does not understand Earth magic deserves to have his testicles demagnetized.  Just a touch of the right frequency at the appropriate area and that will do the trick quite nicely…

Earth, with a mass of 1 M⊕ (or 5.97219 × 1024 kg, for those who are not mathematically-challenged) is a gigantic electrical generator which spins around two magnetic poles.  Once I magnify the frequency emanating from Earth and then apply the appropriate resonant frequencies, I can tap into unlimited amounts of energy.  There are various methods for magnification, but did I tell you that the Frequency Goddess is a bit of a lazy bum?  I believe wholeheartedly in the ‘conservation of energy’ principles of the Universe.  No need to invent some fancy schmancy tool to do the trick.

Remember that rockstar Basalt?  I would simply use whatever old rock I find laying around which could hold the resonance frequency.  Basalt is plentiful, and has plenty enough quartz within it, spread out in equal parts, to do the trick nicely.

Then, I would direct my resonant frequency of choice at said basalt rock, which would be perched at some precise predetermined point on the earth’s surface.  I wouldn’t even bother with the hard work of assemblage.  I could simply scrounge around and use whatever’s been lying around for ages, like maybe a few of those musty old pyramids all over Egypt and the Americas.  Of course, I’d have to replace some of the capstones, as a few of them seem to have been cracked, or even completely gone missing, which reminds me of the last time when something major happened, the capstone on the Washington Monument got cracked.  Light touch, people.  We’re not wrestling wild hogs here.

Any way, I could probably even use some decrepit old derelict like—hmm—oh say, Nan Madol.  It would work because there is so much basalt conveniently aggregated there.  Its sister site Insaru, on the other hand, is a pathetic derelict—its once magnificent skeleton, picked over and scattered far and wide, turned into construction materials and gravel roads.  Of course, this would mean having to rebuild the Nan Madol walls to its former height of around 25 feet with rocks between five and twenty-five tons (roughly the size of a garbage truck each).  It’s not too hard a job for the Frequency Goddess.  All I would have to do is resonate that 25 ton boulder at 1012 hertz and woosh!  Up it goes.

Once the basalt is in place, I simply add the specific frequency needed to do the job (without cracking the capstone, thank you very much) .  This would cause the strategically-perched basalt to vibrate naturally.  Increasing the amplification would increase the force with which it vibrates until the desired effect has been achieved, ie. shutting down power to an entire city (even a country, depending on how widely linked the system is), or causing a targeted localized earthquake to occur.  I could even make hale stones appear in the middle of July!

2 thoughts on “Goddess of Frequency”