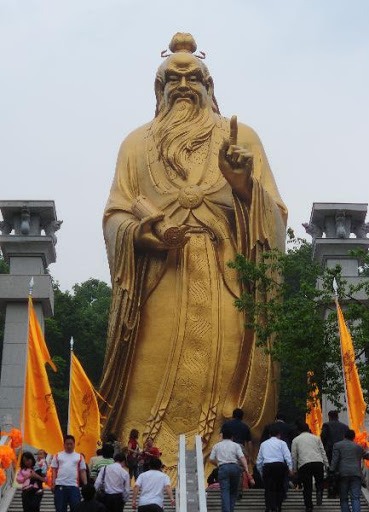 (Continued from Enigma of Lao Tzu 4: The Temple of an Immortal)

Eight years after local authorities attended the ceremonial unveiling, the same authorities now say the statue of the Taoist holy man is unapproved and must go, screams a headline from Bitterwind.org.

The Chinese Communist Party (CCP) ordered local authorities in Luoyang city, in Henan province in central China, to cover and hide from view the world’s tallest bronze statue of Laozi (also known as Lao-Tzu and Lao Tze) who is considered to be the father of Taoism and a deity in Taoist and traditional Chinese religions.

The Laozi statue on the Daoist cultural heritage land of Laojun Mountain is 38 meters tall and was cast with 360 tons of a tin-bronze alloy at a cost of nearly 350 million RMB (about $52 million). It has been designated as a state-level 5A tourist attraction, the highest ranking available. In February 2014, this bronze statue of Laozi was recognized by Guinness World Records as “the world’s tallest bronze statue of Laozi.”

The article also states that if the statue is not covered, it will be demolished by the government, so now the statue looks like this.  No one will ever be able to see this statue again, at least in the foreseeable future. 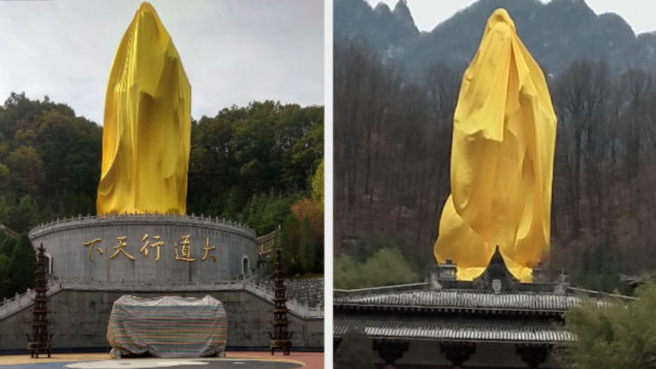 It is now the year 2020.  You would think that this sort of thing is no longer something that would happen in China, but the really sad and pitiful truth is, it’s still happening.

Taoism is again, a target for Chinese government persecution because of only one reason.

Lao Tzu has been so thoroughly banned in China that the newspapers will show five pictures of a HUGE tofu cake shaped into a taijitu along with those familiar and well loved I Ching trigrams, that was served in front of the huge statue of Old Dude, but there is ZERO images of the statue at all. 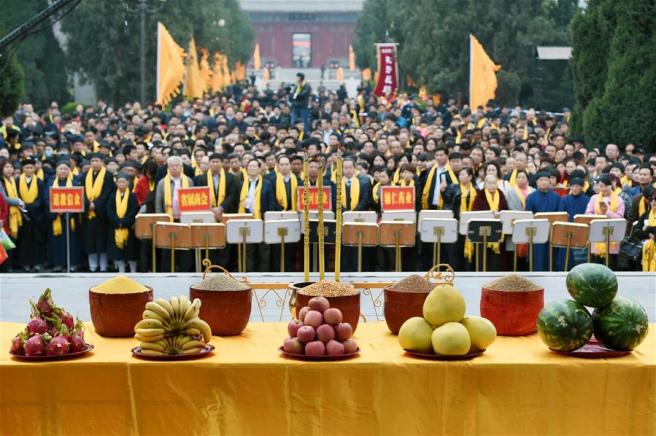 We see a ton of people, all coming to pay respects to the effigy of Old Dude, but there is zippidi-doo-da images of his statue at all.  NONE.  Just lots of people burning incense and attending his huge party.

The last image I could find was of a group of yoga practitioners doing yoga under the statue, but that was back in 2017.  Look at how gorgeous that scene was, and how much he was loved by us all.

Sadly, nothing like this can happen again in the foreseeable future because, for starters, burning incense has been outlawed.

According to another article from Bitter Winter, In October of 2019, when Chinese county officials did an inspection of the Laojun Mountain Tourism Scenic Area, where the giant statue of Lao Tzu stands, they saw incense sticks burning in the incense burner inside the culture garden.  They immediately ordered that the burning of incense to Lao Tzu be prohibited.  There was hefty penalties for doing such a terrible illegal deed as well.

Of course, burning incense is not completely prohibited in general, as long as it is burned in front of state-approved effigies…like Confucius.  Here is a Confucius head that has been carved on to the statue of First Guanyin of Shandong, yet another holy being who has been long revered by everyone. 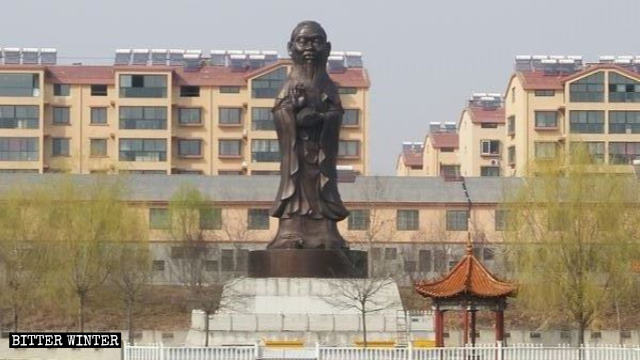 This monstrosity of a statue cost 400,000 RMB (about $60,000) to be constructed, and it was only done because the alternative was that the government would blow up the statue with dynamite.

So, to save the statue, they stuck Confucius’ head onto the Buddha’s body because they know that nobody will touch a statue of Confucius—he has always been sanctioned by the Chinese government as the holy sage of China.

If Confucius knew that this was happening to him, whereby his head would be placed on other Buddha’s bodies, I think he would be highly disgusted and he would say something along the lines of this:

“Study the past if you would define the future.  Only the wisest and stupidest of men never change.” ~ Confucius

Monks Kicked Out of Temples

If you think banning the burning of incense is bad, how about throwing monks out of their own temples on their ears?

The Ethnic and Religious Affairs Bureau has prohibited the personnel at Qingyun Temple from wearing Taoist attire, which includes their prayer beads and other such objects for worship.

I think the worst thing about all of this is that the officials also drove out all the monks from the temples and prohibited anyone else from entering.  In fact, all temples either have already been, or are on the list to be sealed off or demolished.

So now we have a huge number of monks who had been forcibly expelled from the temples, with no place to live and nowhere to go.  The plight of these homeless monks are dire.  Local villagers aren’t even allowed to admit monks into their homes, so now, these monks are on the run, sheltering within broken-down ruins that leave them exposed to harsh weather conditions, especially throughout the winter months.

How absolutely absurd and horrific is that?

A local villager has compared President Xi Jinping to Jade Emperor, one of the three divine teachers of Taoism: “Whatever he tells you to do, you have to do it! It’s difficult for monks to find peace and tranquility anymore.”

Sadly, so many Taoist and Buddhist temples have been either razed to the ground or sealed off that the only way to preserve the very ancient, very historic buildings from being bulldozed was to cover up or board up the statues, and plaster images of Mao Zedong, Xi Jinping, and Confucius over everything.

And you wonder why Confucius hid all of Lao Tzu’s books inside the walls of his home.  This is why!!!  The suppression and banning of Lao Tzu has been ongoing for thousands of years, and continues to this very day.  The only state-sanctioned deity is Confucius because he was born in China, to Chinese parents.  Any people of greatness who happened to be born in India or Tibet or (gasp) heaven forbid—Vietnam—are effectively BANNED.

It gets even worse.  The person in charge of the Laojun Mountain Tourism Scenic Area was fined nearly five million RMB (roughly $742,000) by the Luanchuan county government and Luoyang city’s UFWD, in effect, shutting down everything that has to do with this statue and punishing the organization by seizing all their assets and beggaring them.

It only took a little over a year to erase this scenic historic spot.  Ten years after the statue was erected,  Laojun Mountain Tourism Scenic Area has been scrubbed off the internet  Search results come back sparse, or even empty, and there is a good reason.

They no longer allow visitors to go to Laojun Mountain.  Within the last year (2019) the authorities tell everyone that foreigners cannot go there because it is a special place with some Chinese secrets.

What a bunch of bullshit.  Tourists are not allowed there now because all the beautiful statues have been covered up or otherwise destroyed.  There’s nothing left to see.

If you go there now, what you see is this: 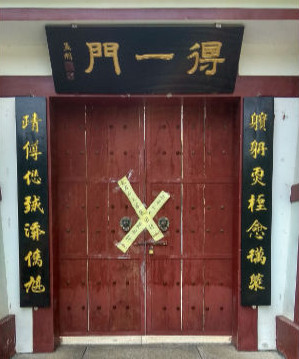 You can still see the images on other websites though, that are not of Chinese origin.  Here is one from a Hispanic website that shows many aerial views of the statue, plus a gorgeous one of Old Dude, standing in the mists.

I knew something like this would happen once word got out that he was Vietnamese.  The Chinese authorities tried to hide it very well.  For thousands of years, nobody knew who he was and what happened to him.  At least nobody who was Chinese knew, or if they did, they kept it a big secret for thousands of years because they were afraid that something like this was going to happen.

The Vietnamese knew because he went BACK TO HIS HOMETOWN IN VIETNAM after he left China.  I wrote about this in previous posts, starting with Enigma of Lao Tzu 1: Who is Lao Tzu?.  In fact, it was an entire series that I did on Old Dude.

We know quite a bit about him.  Heck, we even know what his real name is.  His family name was Lý, his first name was Nhĩ.

Lão means old man.  Tử means young guy.  Since we only call young guys dudes around this part of the country, it pretty much sums up his name for this time period in human history.  Old Dude.

In any case, since I started this whole thing about the destruction of Taoist temples and statues, I guess I need to delve into it and see how bad the damage actually is.  Next post, I will explore more of this tragic situation for the Taoist community in China.