Hi everyone!  Sorry for the long absence.  It has been crazy busy in my part of the world and I wanted to update everyone on what’s been going on in my little corner of Spacetime.

Work on my new book has been forging forward in stops and spurts and I am happy to report that I have come to the point at which I can safely say that I have passed the midway point.   This does not mean that it is downhill the rest of the way.  It just means that all the work I have poured into this book has finally reached some semblance of finality and I am actually starting to see the fruits of my labor coming together into something that is starting to look like the final product.

In short, I have spent a lot of time on this book, time that I could have put to use updating this blog, which got me to thinking—what is time, really, and how does it affect what I’ve been doing?

I had to stop my writing work this morning and ponder on this subject, one which I have written extensively about in the past, but which I wanted to revisit.  But I cannot talk about time without mentioning space because, obviously, the two are intertwined (along with MotionEnergy).

So I come back to Spacetime, Timespace, and Motionenergy. 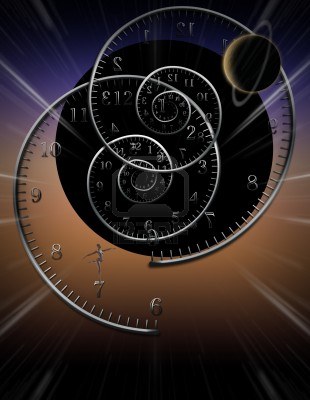 A quick recap on this concept:

Of course, nothing in nature is at a dead standstill.  Everything moves with its own inherent motion, and then is affected by motion all around it.  Everything vibrates and spins and cavorts through the realm with which it finds itself.  This is Motionenergy (time/gravity depending on which side of reality one were to look at it).

As Dr. Kozyrev stated, “time possesses not only energy but also a rotation…which it can transit to a system.” [2]  This rotation of movement is drawn as a Flower of Life and also represented as the Tao symbol of the yin/yang.  I call it the Sphere of Life because this sphere is present in everything.  Absolutely everything, from the micro to the macro.  This can be represented by the Grand Unified Theory represented as:

According to Dr. Chaim H. Tejman, “energy (energetic matter), space and time are one. Wave theory introduces energetic matter — a single inflationary force — as the main creation of nature. Energetic matter creates wave formations and they, in turn, create everything.” [3]

If I take myself and place it directly into this equation, I would describe myself as a coordinating unit of particles that is moving through Timespace.  I am moving so fast through time that, to an observer outside of my immediate Spacetime, I am basically a wave.  Since time is not one-dimensional (seriously—come on now, nothing in nature is one-dimensional except perhaps in some vague mathematical construct of the human mind), I can move backwards, forwards, sideways, and spin about in any direction that I choose.

The problem is, I do not yet know how to travel through time, something that mathematically and scientifically can be done because the Motionenergy that powers our Spacetime is also powering Timespace.  It’s two sides of the same coin.  Since it is that stable, we can visit both sides and move around in pockets and wrinkles of time.

If I could do that, I can ‘cheat’ (so to speak) and finish writing my book in Timespace, in no time at all, and then I can come back to my own Spacetime and enjoy the summer without having that ham-hock of a book hanging around my neck and spoiling my summer plans.