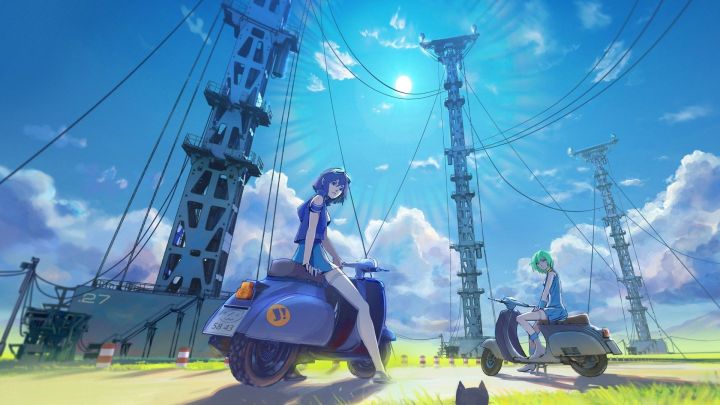 As of mid June, things seem to be on the quiet side (other than the Brexit slamming world stocks into the ground).  The sun still shines its single point of light onto the world below (…for now).  The atmosphere is still a bright crystalline, shimmering azure blue (without those rose-colored glasses, I can’t see anything in that infrared spectrum any way).

Even as the world around me continues on its cyclic round of winter/summer, day/night, I am still focusing on maintaining my sacred Towering duty.  But just because we are Towers does not mean we don’t have to concern ourselves with what’s to come.

We are not dumb stumps with appendages and protrusions upon which wires hang like chains of bondage.  We are free to act as we see fit.  The world changes around us, and we are obliged, as intelligent beings, to observe and then think critically about how to control the flow of changes to best benefit everyone.

To control this flow, we need to know how the cyclical system of the Universe works.  I will do my best to tie all the ancient I Ching material to what we now know, of the planetary and solar cycles.

Cyclic Change is a rotation of phenomena, each succeeding the other until the starting point is reached again.  Cyclic change is recurrent change in the organic world.  To make more intelligible the nature of cyclic change and the alternations of the trigrams produced by it, their sequence in the Primal Arrangement is shown. 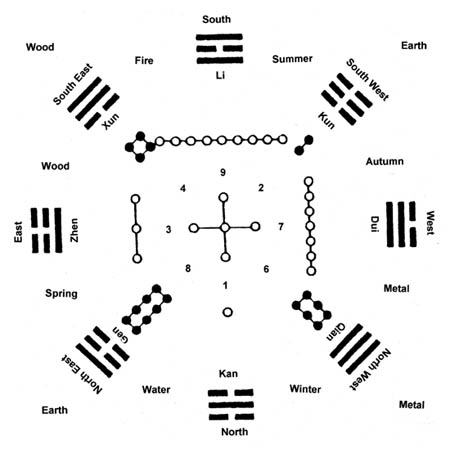 Here we have the sequence of the trigrams in the changing seasons of the year, and in such a way that each is the cause of the one next following. [1]

The year that is represented by the trigram sequence can be taken as a single Earth revolution, encompassing the 24 hour day, but it can also be understood as any of the various cycles that the quark, the atom, the human, the Gaia/Lunar, the solar system, the galaxy, even the Universe goes through.  This is because it is a fractal that represents the same ordered system, from the microcosm, to the macrocosm.  As an aside, humanity’s placement is right in the middle of all these cosms (more on this later).

There is a multitude of cycles of all things within the Universe, but we’re not going to get into cycles that don’t immediately affect us.

Since we are Earthlings, the only astral cycles that matter to me are the cycles which affect the Earth’s temperature changes.

These cycles are called Milankovitch Cycles after Milutin Milankovitch, the scientist who developed the hypothesis linking these cycles to Earth’s climate changes. [3]

The Milankovitch Cycles are, in no particular order:

Since I have already delved into the Wobble in previous postings, I’m going to start with Wobble.

In an earlier article named Winter In July, I dug into the hypothesis of the cyclic nature of Earth’s Wobble (General Precession), a 25,700 year cycle which we are currently at a little more than half way through.  This is one of several major cycles, collectively called the Cycle of General Precession,that affects the Earth.

The Wobble is the Earth’s slow wobble as it spins on axis. This wobbling of the Earth on its axis can be likened to a top running down, and beginning to wobble back and forth on its axis.  The science of the I Ching describes this Wobble as the four seasons of the Primal Arrangement.  Since each cycle of General Precession is 25,700, if we divide this by four, for each season, we get 6,425 years per season.

In Book 2 of the Shuo Kua, the Wing goes into a description of summer.  It is the high point of the year, midsummer, or, in terms of the day, noontide.  Here is the place of the trigram Li, the Clinging, light.  Creatures now perceive one another.  What was vegetative organic life passes over into psychic consciousness.  Thus we have likewise an image of human society, in which the ruler, turned to the light, governs the world. [2]

According to the I Ching, we are currently in the Clinging Light, or the midsummer Li of this major 25,700 year cycle.  This is the high point of the General Precession and we, who are organic and/or vegetative will now be able to (or very soon will be able to) perceive one another using psychic abilities because we will be passing into psychic consciousness.

I will delve further into this passage into psychic consciousness in a future posting, but for now, I want to focus on cycles and finish this train of thought.  Since I have already done a fairly substantial post on Wobble, I will not belabor the point here and will continue onto Orbit.

Orbit is a 100,000-year eccentricity cycle, which is a measure of how far the cycle deviates from a circular path.  In this image, a perfect circle is one where e = 0.0.  Any eccentricity, causing the circle to be stretched, would be shown as e ≠ 0.0.

The shape of the Earth’s orbit is almost circular (0.000055), but there is enough variation so that it changes to 0.0679 at certain points in its path around the sun.

These variations occurs over a period of 413,000 years and loosely combine into a 100,000-year cycle of variation between −0.03 to +0.02.  This 100,000 year eccentricity cycle shows up in deuterium traces found in ice cores [1] and is where we see the temperature peaks and valleys that the ice cores show.

Generally, Earth spends about 80-90,000 years in an ice age and around 10-20,000 years (or so) in a warm period.  During the cold period, everything goes into frozen stasis.  Most life dies off, and we humans get pushed back into the caves to try and survive the frigid conditions.

But then, every 100,000 years, something drastic occurs which heats up the entire solar system, thereby defrosting everything enough for life to spring forth (more on that drastic something later).  Technically, we are still in an ice age because our poles are still frozen, but we have moved far enough into the current warming cycle to be considered well within the warming phase.

Subsequent inspections of the graph (and indeed, all the physical evidence such as those from flash-frozen wooly mammoths with summer grass still in their mouths) show that when the end of the warming phase happens, it is not a gradual slide into winter.  Rather, it is a sudden and unexpected plummet, straight down into the depths of freezing hell.

The 400,000 year graph shows we have been lingering in the midst of summer for quite awhile now.  This means we are at the end of this short 10,000 ~ 20,000 years that have been given to us so that we could advance humanity far enough to find a way to survive the long hard 80-90,000 year winter ahead.

Since we won’t be around to see the end of this cycle of summer, I won’t lolly around too long at this cycle.  Let’s keep going onto the next cycle, which is A 41,000-year obliquity cycle (tilt). 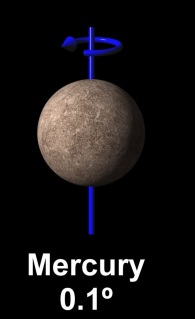 At an obliquity of zero, the two axes point in the same direction and the object has no tilt.  In this case, zero obliquity means that the rotational axis of the planet is perpendicular to the orbital plane, allowing for the even spread of the sun’s rays onto the surface of the planet.

This image shows Mercury’s obliquity, which is so close to zero that there is hardly any angle at all.  Mercury’s rotational and orbital axis are almost in the same spot.  This is not the case with Earth’s obliquity.

If all we had to deal with are these few cycles of changes, I would not bother you with the scientific details that you could easily read from any science journal out there, describing the precession cycles.  Interestingly enough, there are a couple of odd issues which stick out in regards to this General Precession hypothesis.

The first of these thorny anomalies is the overwhelming excessiveness of angular momentum which plagues the solar system.  The angular momentum of a system is defined as equal to the sum of the moments of the entire system.

The second thorny issue is the collective precessionistic attribute which every single entity of our Solar System exhibits.  You see, it’s not just Earth that has this precession, it’s every planetary perihelia, from Mercury to Neptune and all other dwarf planets beyond.  They all slowly precess around the Sun.  The kicker is, the sun itself also precesses, which brings me to yet another cycle that needs to be addressed.

In fact, this cycle nicely ties the two thorny questions together so that they actually make sense in a very simple and elegant fashion.

NASA nicely obliged me with the long-overdue announcement that they had found the first hints of a ninth planet, wandering waaaaay out there beyond the Oort cloud, with a solar cycle of approximately 20,000 years.

This image shows the various far flung elliptical planetoids that cycle around the sun on one side, with the ninth planet coming in from the other side, circling not just our Sol, but also another sun (see that white dot within Nine’s orbit?).

Add all these astral bodies together and suddenly, the sun’s lack of adequate angular momentum, as well as the collective precessionistic attributes of all the astral bodies suddenly become no problem at all.

It all fits in perfectly, like hand in glove.

In a roundabout fashion, a few years back, I had touched briefly upon the cycle of the Ninth Planet with one of my previous posts, Something Very Dark Out There, leading up to the next posting which continued that thought, The Moon Does Not Lie.

I’m waiting with bated breath for them to announce the tenth and eleventh planets (there should be three in all, along with a small assortment of moons).  We will revisit this article when that day happens.

Until then, happy Towering!