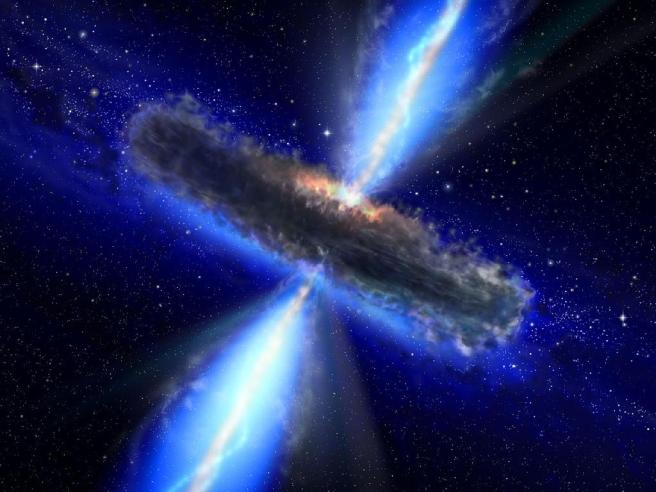 When I first read about this exciting new discovery of an abundance of water (yes that’s right, sweet simple H2O) coming from a huge quasar out in the deep cosmic ocean, I thought to myself, WOOHOO!  We done found it now!  Two teams of scientists from our very own Caltech discovered it, and it is a doozie!

This quasar is so BIG, and so BRIGHT, and so VIOLENT that it is one of the most visible happenings in the cosmos!  It is so big that if we take all the water on Earth and multiply it at least 140 trillion times, that’s how much water is present around that quasar. 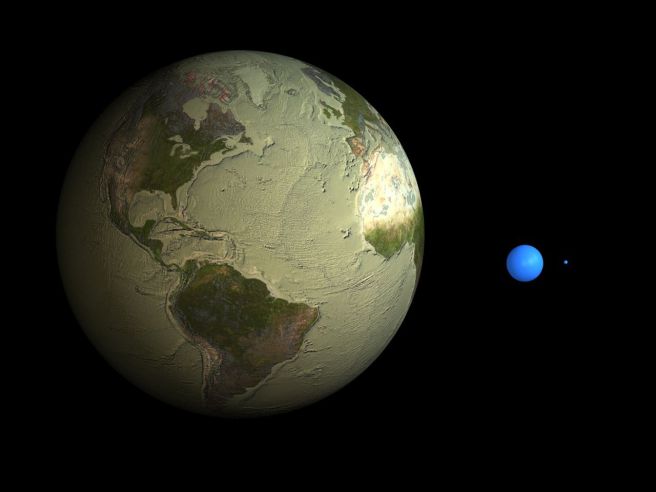 If all of Earth’s water can coalesce into one blue ball, this is what it would look like.  Salt water is the larger blue sphere, fresh water is the small blue dot. ~ image courtesy Gavin Rothery*

So just imagine this little blue blob of water, and then multiply it 140 trillion times.  All that water is roughly 100,000 times more massive than our own sun. **   OK, I don’t know about you, but I seriously cannot imagine 140 trillion volume of Earth water.  My head just doesn’t quite work that well when we get to numbers that astronomical.  All I can say is that if this isn’t the Great Water, then it should be.  There isn’t anything else like it in our cosmos.

Speaking of our cosmos…

This quasar is about 12 billion light years away from us, in essence, very close to the start of where it all began, back about 13.7 billion years ago.  In fact, if we can cross this ‘Great Water’, we will be on the cusp, at the edge of when all time and space and matter started.  We will be peering at the very moment when the Word was spoken and all things began.  Keep in mind these are high-end, hella expensive front row seats to the exact point of where it all happened.  With the right tools and enough money thrown at the problem, we can get back to the source of everything, back to the time and space when “Tao produces one, one produces two, two produce three, three produce myriad things, myriad things, backed by yin and embracing yang, achieve harmony by integrating their energy…” ~ Lao Tzu

I, for one, would love to cross this Great Water and return to the source to discover for myself how and where the light first began to shine.  I touched upon this briefly in my previous post, Holographic Nature of Our Existence, but to get to that zero point, we have to traverse this Great Waterway.

Many, many ancient texts have talked about it in depth, from the Uttaradhyayana Sutra, the Bhagavad Gita, the Dhammapada, even the Bible.  this Great Water, as referred to in these great holy scriptures, has been likened to a Great Journey of the Soul, a Great Test of Merit and Mettle, and even that Great Divide which separates the living and the dead.

In the I Ching, the image of wood over water (Sun over K’an) is repeated many times.  It tells of the ‘crossing of the great water’ using wood as a means of communication across bodies of water, and for travel to distant places.

This is the meaning of Hexagram 59 – Huan/Dispersion (Dissolution)

The Judgement
Dispersion.  Success.
The king approaches his temple.
It furthers one to cross the great water.
Perseverance furthers.

The Image
The wind drives over the water:
The image of Dispersion
Thus the kings of old sacrificed to the Lord
And built temples.

Before I begin delving into the intricacies of Hexagram 59, I need to share something with everyone.  At the time that I was doing this divination in an attempt to address the question of what it meant to Cross the Great Water, there were several synchronicitous events that occurred.

The first was the happenstance of finding an old article, written back in July of 2011 from Caltech about the huge mother lode of water found at the edge of the cosmos.  The second was throwing the coins and getting Hexagram 59, and finally, when I opened my I Ching book to begin my reading, the pages, of their own volition, opened up at a section of the Ta Chuan which talked precisely about the Crossing of the Great Water.  With all three fortuitous happenings occurring within the space of a few minutes of each other, I decided that it was time to add another hexagram to my collection of written divinations.

Let me tell you, Hexagram 59 is a slightly tricky hexagram.  What I mean to say is that it is not saying what it seems to be saying.  To understand this hexagram, we have to combine the contextual meaning of the two trigrams of wood (sun) and water (k’an), as well as the ancient knowledge of the life and experiences of King Wên, who, at the time of the writing of this hexagram, was in a dungeon, awaiting his son, the Duke of Chou, to come and release him.  As I read the Judgement and the Image of this gnarly hexagram, I am beset with certain questions:  All this talk of water and temples and kings—what does all this have to do with what we are talking about?  Well, after a bit of meditative reflection, the answer shines forth, fully formed. 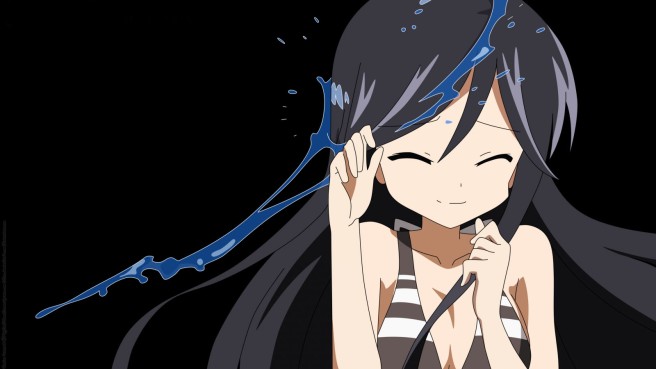 This hexagram, though entitled Dispersion, is not talking about separation but rather unity.  The Dispersion that is indicated is one that is done by wood over water, which means a method of communication has been dispersed to reunite elements that had been previously separated.  The dispersion is that of dissolving that divisive egotism in people.  As Richard Wilhelm states in his translation of the I Ching:  “In the common concentration on this goal, all barriers dissolve, just as, when a boat is crossing a great stream, all hands must unite in a joint task.  But only a man who is himself free off all selfish ulterior considerations, and who perseveres in justice and steadfastness, is capable of so dissolving the hardness of egotism.”  ***

The sages of old, (or king) could do this by leading the people to a place of worship or a ceremonial gathering.  This place of worship (the temple) has the power to override petty divisiveness of the common human and unite the deep strong ties and emotions of a deep-rooted consciousness about the common origin of all things (the Lord).  This gathering is also utilized to set a high goal, a will of the people, so to speak, with a common great undertaking, that of creating a vessel that is mighty enough to cross the Great Water.

Now, the last part of this talks about the One Creator.  Wilhelm states:  “The hearts of men must be seized by a devout emotion.  They must be shaken by a religious awe in face of eternity—stirred with an intuition of the One Creator of all living beings, and united through the strong feeling of fellowship experienced in the ritual of divine worship.”   In order to build this great vessel, the people have to be united enough to do so, and the only method of unification is to touch the core of their belief in a single Creator of all living beings.  This means that there must be enough people who are able to comprehend the idea that we are not separate individuals, but rather individuated digits of the same hand of the Creator.  There must be enough people who can grasp the truth, which is that in this whole Universe filled with humans and other wondrous beings, there is only ONE of us here.

I have no doubt that we will eventually be able to cross that Great Water, whether by means of scientific achievements or by internal ascension of the collective souls.  Either way, we cross the waters.  We were all born with everything that we need to be able to navigate the waters.  Whether we choose to utilize what we know to build and create that reality which allows us to cross safely is up to us.  The fact that we are at the cusp of understanding HOW to do this herculean task is amazing, but it is nothing compared to understanding WHY it is necessary that we cross this Great Water.

Here is the tough part of the truth.  No one gets to step onto the other shore until all are safely across.  Whether we go with others or go alone, we can’t get to the other side until everyone is ready to go.  Why?  Because we are a single organism, that’s why.  All this petty talk about so-and-so being better than another so-and-so, well, that’s like saying my left eyeball is better than my anus.  If I want to cross the Great Water, I’m sorry, but I can’t take my left eyeball over without hauling my butt along as well.  There’s just no other way.  No compromise on this.  Get it?  Oarsman or no oarsman.  All go across, or no one goes across.

7 thoughts on “Hexagram 59: Dispersion and a Discussion of Crossing the Great Water”