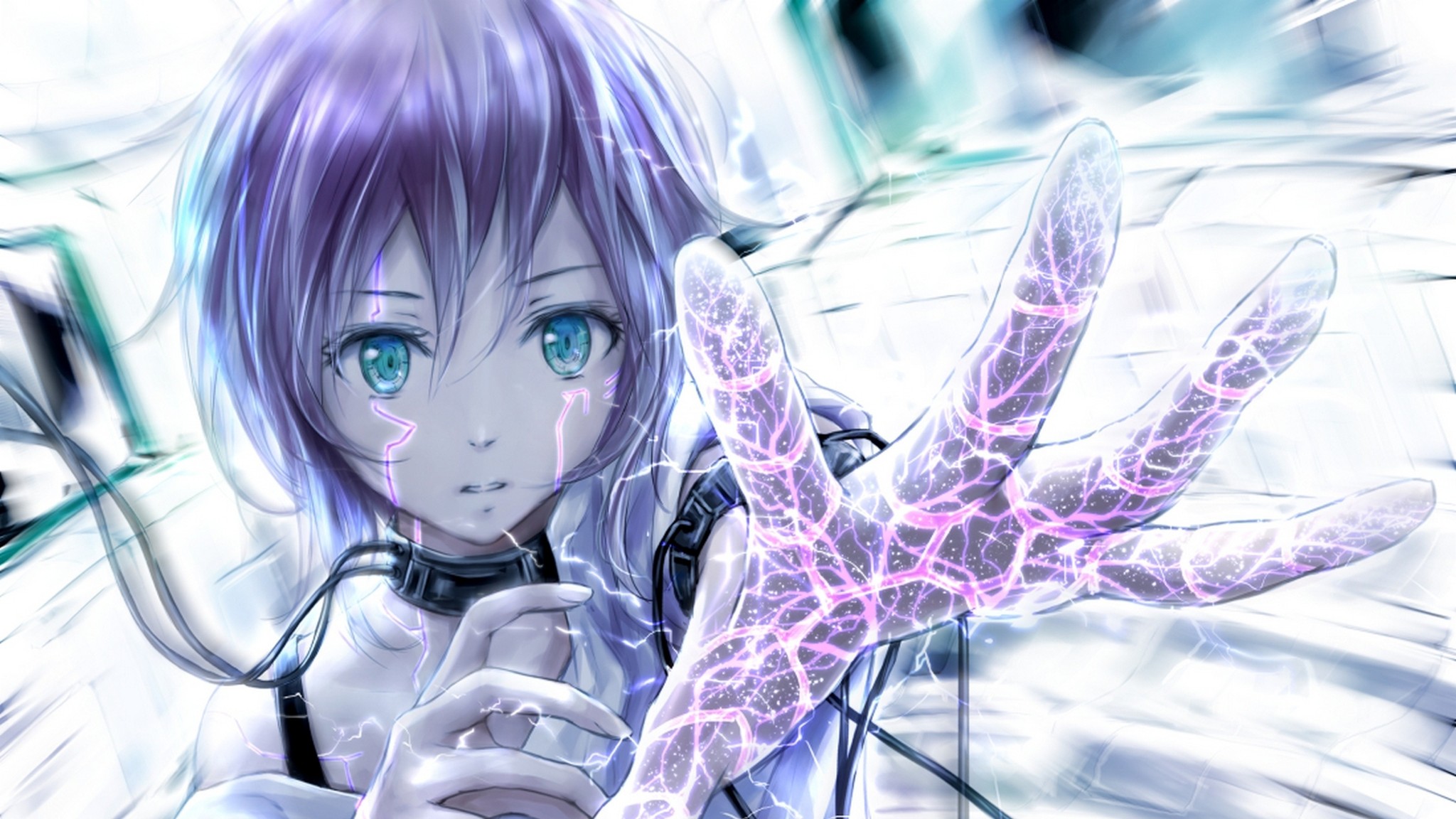 Yep.  You heard me right.  I said MODERN-DAY CRISPR BABIES…as opposed to ANCIENT-DAY CRISPR BABIES. (Lookie that, I made up another word).  It’s not as if this sort of genetic tinkering hasn’t been done throughout the musty ages of a distant past (see Organic Alchemistry 7: Garden of Eden).

In fact, this sort of tinkering happened in such a distant past that we literally choke on the dust as we trawl through the minutia of tiny ear bones to find out the specifics on what actually happened, 300,000 years ago. 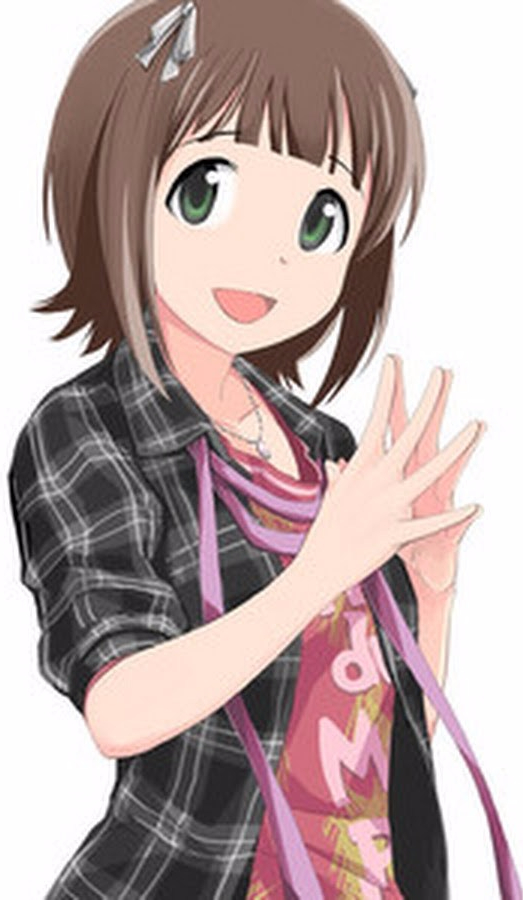 Well, it’s moved onto the stage where Frankenstein’s monster has figured out how to make other monsters (or in this case, make his progeny less monstrous).

People, this is not that crazy-sounding.  We are now able to do this, and on a global scale, at that.

This dovetails perfectly into the various changes that occur, MUST occur, for the continued development of humanity.  We cannot stagnate.  A species that does not grow and evolve will soon become obsolete and head towards extinction.

It is no longer in the hands of the gods.  We are in the driver’s seat now.  We are not just the ones being changed by forces above and beyond our grasp of understanding.  We are not even a catalyst for change.  We are the active participants of the change.

Talk about initiating human-induced sequent changes, a few months ago, a doctor named He Jiankui was sent to jail for performing human embryo editing work using a technology known as CRISPR. The babies names, interestingly enough, are Lulu and Nana (ancient sumerian names).

As an aside:  We humans were called lulus by the Sumerian gods because we were not considered fully-human, and were only supposed to be used as cheap, disposable slave labor, whereas Nana is a Sumerian god, Enlil and Ninlil’s son, aka Sīn (I can talk more about Nana in another posting if there is any interest in Sumerian ancient writings). 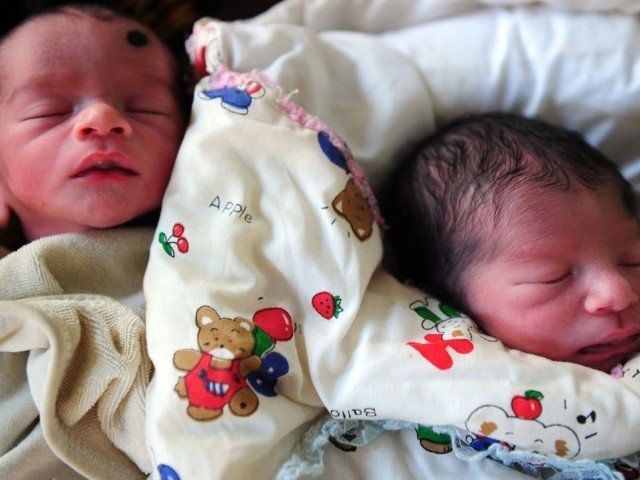 Two years ago, Dr. He Jiankui successfully edited the genetic information of human embryos utilizing a method known as CRISPR, which is an acronym for Clusters of Regularly Interspaced Short Palindromic Repeats. They do this by using Cas9, a protein that is an enzyme that can be used to cut DNA.

In the best of worlds, it can eliminate genetic diseases which allows for the strengthening of human stock.  In the case of chimpanzee/human cut-and-paste CRISPR, the same (or similar) process was done.  A small amount of our chromosomes was snipped off and deleted, and a few other small segments were completely turned off, and we essentially turned into a different species. 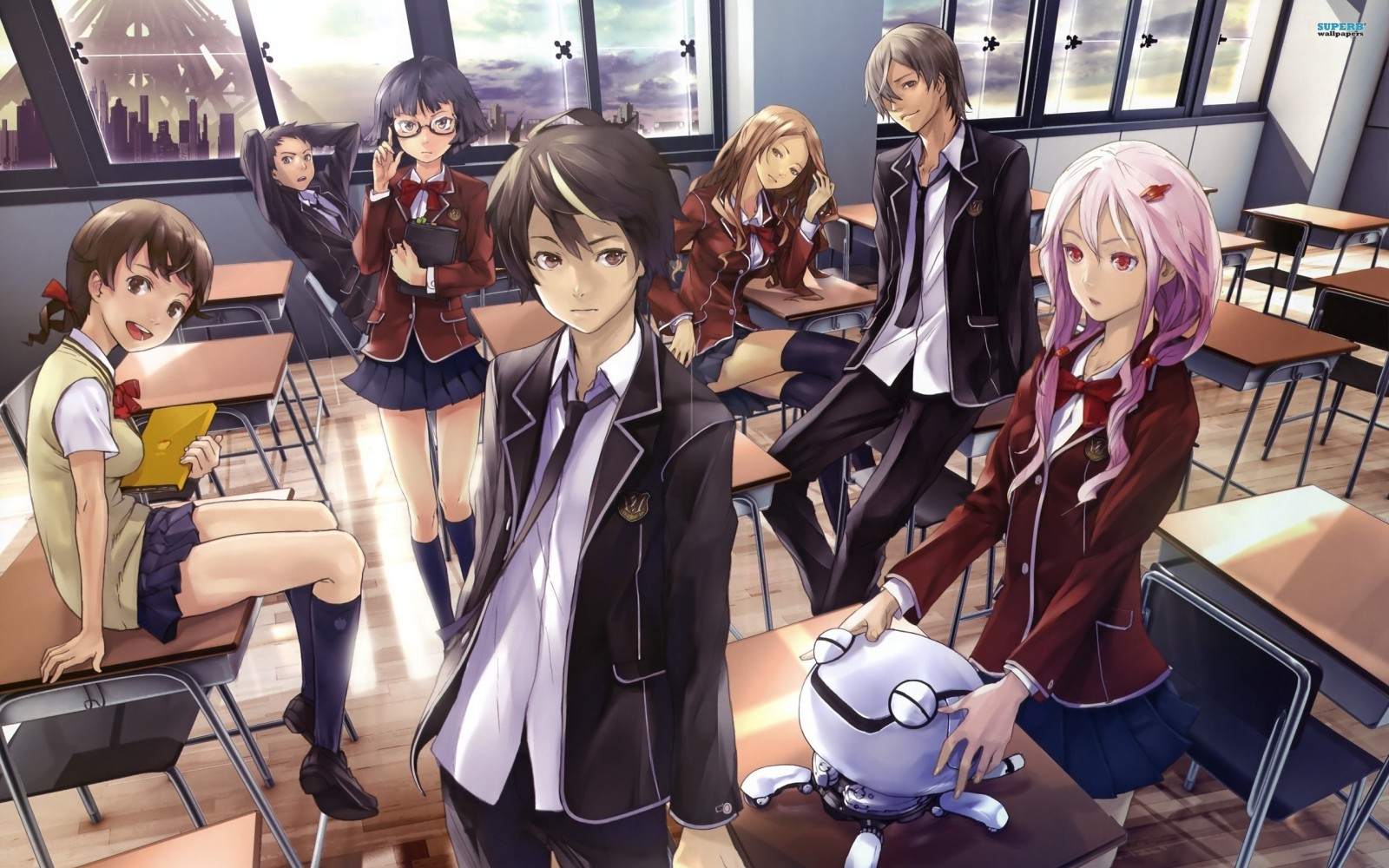 While all the other primates have 48 chromosomes, our version, Homo 3.3, only have 46, which gave us a serious DNA upgrade.  That edited gene sequence is in every single cell of every single Homo sapiens that has ever lived on this earth within the last 200,000 years.  That fused chromosome is called Chromosome 2. 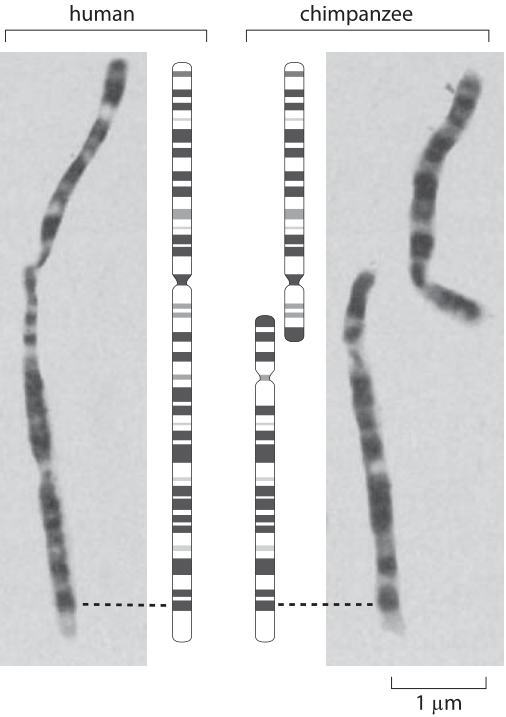 Chromosome 2 is a very important chromosome in the human genome.  It is the second-largest human chromosome, spanning more than 242 million base pairs and represent almost 8% of the total DNA in human cells.

The chromosome is a gorgeous result of an end-to-end fusion of two ancestral chromosomes, and the handiwork cannot be considered anything but brilliant.

The sections that needed to be snipped were done at the precise section in between two important nodes, and the resulting unused ends were cleanly deleted.

Then, within the remaining section that had been fused together, certain areas that were redundant were either turned off, or removed completely.

It was nothing short of miraculous, but as with all things, there is a dark side to this. 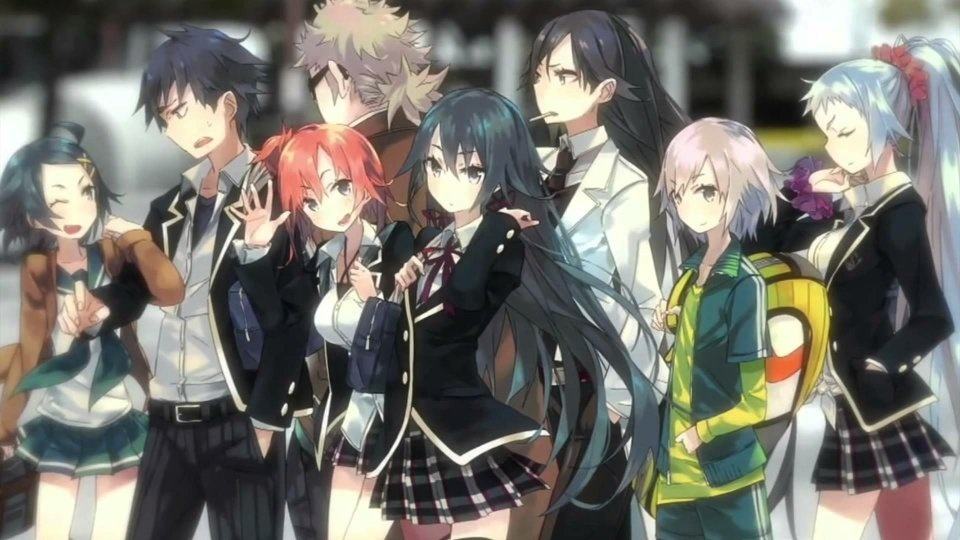 In a macabre dark world, an entirely new race of beings could also be created—beings that may no longer look or act like their parents.  Although they would still be classified as Homo sapiens, these new beings  would no longer be part of Homo sapiens sapiens. They would be considered a new type of sapiens.

Since we haven’t been formally (ie. scientifically) introduced to one yet, at least as far as I am aware, I’m going to call this new type of human Homo sapiens deus (human gods) for now.  I will be sure to return to this page and update the new term once we get official words on the new godlings, who have such extensive genetic alterations that they can no longer reproduce with regular old Homo sapiens sapiens like us, and if they did, their children would be born either sterile or DOA (dead on arrival).

So if our progeny is going to evolve into high beings than us, what’s the issue?  Why would we be so upset and want to ice this type of research? 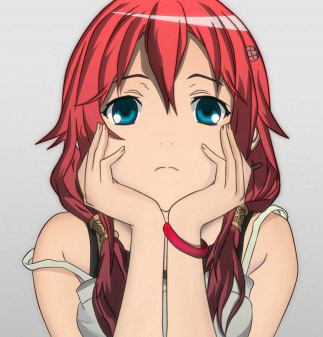 Just because it was done to us 200,000 years ago, and we turned out pretty good does not mean that it was an ethical decision.

The event itself was not for the betterment of mankind.  We would have eventually gotten to this point, at our own pace, albeit super slow and plodding, but it would have happened eventually.

Instead, it was done for very selfish reasons—so that we could be forced-grown into the next evolutionary iteration for the purpose of doing work that nobody wanted to do.  I bet you anything that those folks back 200,000 years ago knew how to CRISPR, and they had mastered and perfected the technique.

They went through many iterations of malformed grotesques born of genetic tinkering before they were able to get a working prototype up and running.  I detailed some of this process in Organic Alchemistry 3: Ancient DNA Upgrade.

For us today, the science behind CRISPR is proven and precise, but it is not absolutely perfect, and if we are going to be doing medical procedures on real live human beings, we cannot use them as lab experiments, especially if they are babies who cannot yet give their consent to being genetically experimented on.

This is how CRISPR works.

Cas9, a protein that is an enzyme that can be used to cut DNA.  The scientists use Cas9 to target a specific spot in the dsDNA and create a clean perfect cut through the DNA by changing the nucleotide sequence of crRNA, which binds to its complementary DNA target.

The cut areas then could be used to insert or otherwise change a DNA to produce a desired change in the DNA of a human.

The guide RNA (gRNA), like a lusty sailor, will happily spot its intended target and bind to it, but if there is another area of dsDNA elsewhere that is very similar to our intended dsDNA, our guide RNA may not be particularly selective, or even that loyal.

It will go and bind itself at other similar locations, thereby causing off-target cuts at unintended areas.  If this happens, it causes horrible freaks of nature, something that the Sumerians gods also documented.  While I sympathize with Dr. He, I cannot help but wonder if there could have been a better way to achieve the same result without having to go to jail and have one’s lifework suspended and/or destroyed.

In any case, let’s just say that all the poor unfortunate freaks of nature are summarily eliminated, and all the better-than-human aberrations are allowed to live and breed (like a dog breeder type of endeavor), what happens next?

Once the Cas9  has snipped apart the dsDNA and removed the unwanted parts, (assuming that it was a clean operation and Cas9 didn’t snip other similar parts), then the scientists will insert other genes—what we would call super-genes (or god genes)—into the snipped section.  This will then transform endogenus (internal) and exogenous (external) fields, forming super-gene-signal wave structures (I explained about the wave structures in my previous post, Organic Alchemistry 2: Wave Genetics). 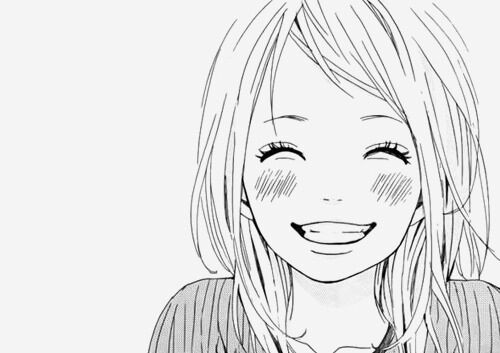 Okay, you twisted my arm.  And the simple answer is…

It’s a group of genes that do one specific thing really well.  It makes whichever group that inherits it–well…super!

For example, 87% of Tibetans inherited from the Denisovans, a super-gene group named EPAS-1 which allowed them to live in high altitudes with low oxygen levels. [2]  The Tibetans inherited this super gene from unknown humans to survive life on the Roof of the World.

There is also the Bajau people from the areas south of the Philippines.  Their super power, also gifted to them from the Denisovans, is the ability to dive underwater and hold their breaths for inordinate amounts of time.   That is such a cool super power to have.

If you are starting to think that the Denisovans got the best genetic traits out of all the human species, past and present, you would be correct, and there is a very good reason why that is the case.  In my previous post, Organic Alchemistry 4: Nephilim of Altai, I gave a brief description of the Denisovans, who would be considered the Nephilim in the Christian bible.  These were the giants that walked among humans in those days, which brings me to a strange thought.  If they are so much larger than we sapiens sapiens, how do they manage to have sex with humans, and how do sapiens women give birth to such large babies?

Back to the subject at hand.  Even though super-genes are only found in certain groups of humans and not in others, lack of it does not make one less human.  The presence of a super-gene, however, tends to improve whichever group it endows.  It also seems to be the case that each enclave of far-flung humanity got a fair share of unique super-gene, tailored to suit whatever area of the world they happen to reside in. 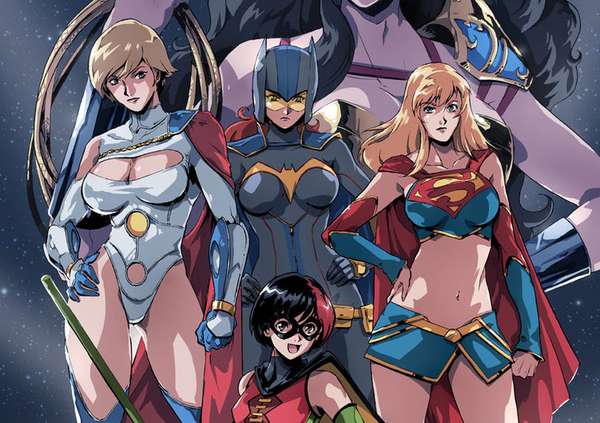 My own super power is rather banal and boring. I happen to have lower-than-average blood pressure and lower-than-average body temperature.  Every time I visit my local neighborhood doctor for my annual health check-up, the nurse has to take my blood pressure several times to make sure she’s not getting a false reading, because ‘OMG, it’s sooo low!’

And during those rare times when I get sick (it’s been many years, but it happens sometimes), it takes a huge spike for me to go from my usual (aprox.) 96 F to what most people would consider to be ‘high temperature’.  For me, a temp of 101 is super high because that’s a full FIVE degrees above my normal body temperature.   That’s like some normal person with a temperature of 103!

So there you have it.  We humans are not done evolving yet.  With every child born, there is a chance for a new mutation which will allow it to do crazy amazing things, like…I dunno…start fires with our minds?

3 thoughts on “Organic Alchemistry 8: Super-genes and the Modern-day CRISPR Babies”