(Continued from The Original Asian Zodiac 5:  The Twelve Earth Branches)

I have to state for the record that this subject is an exhausting subject to dig into.  I kept running into a few issues, and although they are not huge issues, they exhaust me.

Firstly, all the words are not modern.  They are either Middle Vietnamese, or Old Vietnamese, or Ancient Vietnamese.  I can find decent translations for the Middle and the Old, but some of the ancient words needed digging into contexts of where they had been found.  Since I’m not trying to get a phd, I abstained from listing all the context passages that indicate the meanings because I’m not trying to write a dissertation for Viet Linguistics (although that would be a fun thing to dig into).  I just stated the meanings out and I’m done with it.

Secondly, in just about every book written on this subject, you will find various explanations for the roots of these ten words, but they are all over the place.  A few don’t even make sense.  Some say it’s the ten days of the week, and others say it’s dead people’s names.  I’ve even heard that it’s supposed to be the names of ten stars in the sky.

The truth is really only clear if one has an intimate understanding of the hexagrams of the I Ching.  For those of you who actually do I Ching divinations, you will find this to be quite obvious.

The ten names are taken straight out of the Vietnamese I Ching, and the meanings of each stem corresponds to the trigrams indicated.

If any of you are I Ching experts, you will see the correlation between it and the astrological signs used as the ten heavenly stems.  Since there are ten Stems and only eight trigrams, two are repeated.

Let’s take a look at them.

These are the ten Can-Heaven-yang-sun and the meanings of those words.  I can call them by their English names if it makes more sense.  For example, Giáp, in ancient Viet, means Thunder.

I’m just afraid of making it even more confusing, so I chose to keep the original Viet word, rather than translate it from Middle Viet –> to Ancient Viet –> to English.  It is a big mess that way.  However, if you want to see it completely translated and defined more rigorously as a unit, then let me know and I will create something that will try to clarify this a bit more.

The Can Chi Cycle

Before I get into the combo platter Can Chi, I need to reiterate the various components that make up the 60 year cycle of the Can Chi.  I added a little bit more than 60 years because I realized that I had started the cycle with number 1, which is Giáp Rat.

Now, normally, the best place to start is at the beginning of a cycle, so we can see how the cycle progresses through its iterations. Problem is, Giáp Rat started 96 years ago, meaning it is only personally relevant to someone who was born in 1924.

Since we are currently living in the year 2020, that means the chance of someone reading my blog at the grand age of 96 is slim to none.

In the meantime, 96 – 60 =  36.  If I only presented 60 Can Chi, which is really all I need to explain the process, then anyone who is younger than 36 years old is not going to be able to see their relevant information without doing a little bit of arithmetic.

Now, you all know I hate math with a passion, but since I was already neck deep in this chart, I figured I might as well extend it out so that it covers everyone alive today, plus any children you might have for the next 20 or so years.

The Can Chi Components:

The Five Elements of the I Ching:  wood • metal • water • earth • fire

I just suddenly realized I never went into the Five Elements, so I will do it now.  Back in ancient days, we only had five elements.  Wood, metal, water, earth, and fire.  We used these as symbols and as components that enacted changes.  For example, a rat is just a rat, until it’s turned into a fire rat.  Now it’s super rat!  😀

It is also the same for the Heavenly Can, which adds its specific meaning to the combination of the animals and one of the five elements.

When lightning strikes water, it zaps around on the surface, but gets neutralized when it goes below the surface.

Since this specific metal rat is the kind that you find under the surface of the ocean (see the I Ching images in the table below), what happens is that if lightning happens to strike the metal rat, the first thing that happens is that the fully submerged metal rat will not be harmed, and can therefore be a conduit and transport the dangerous current away from others.

The scope of a post is so small that I can’t go into each of these years in detail like this, but that is what each year would require for more in-depth understanding of how the I Ching’s insights give to the zodiac animals.

I made the I Ching images in green italicized texts to separate them from the Can Chi.  I translated it as best I could, but quite often, an individual word can mean more than one thing.  However, I think I have them accurately translated.  If anyone sees errors, please let me know and I will fix it.

In future, I will separate the Can Chi I Ching chart out into its own page because it’s rather long.  For now, it can stay here for a bit.

This is the entire 120 year rotation that the Can Chi cycle goes through.  That means in the year 2044, we go back to the number 1, and we get Giáp Rat again.

The Can Chi of the I Ching

As you can see, it is much more difficult to see the entirety of the cycles if you write it out as a table like this.  We Viets turn it into a circle with numbers and letters, but for me, pictures do so much more to simplify and clarify.  The images help so much since I’m a visual person.

So here is the wheel of the zodiac with all the numbers displayed. 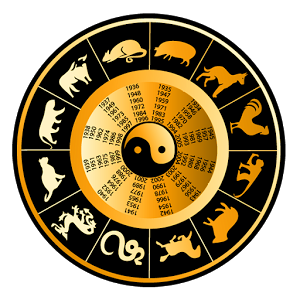 To read this circular calendar, you need to read it in counter-clockwise direction, as this is how it was read back in the old days.  Start with the Rat at the top and work your way through the water buffalo, tiger etc. until you reach the Pig, and there is your 120 years of animals.

Yay we’re done!  It took me so long to get all this researched and presented because even though I was quite familiar with the I Ching, the difficult part was translating moldy old Viet words into something that resembles how we would think and talk in today’s world.

There is also another issue.  Quite a few ancient Viet words don’t have an English equivalent, so I had to combine different words to make up new words or try to translate as best I could, the context of what something means.

Next up…how to figure out leap years and when exactly Tết will occur.

One thought on “The Original Asian Zodiac 6: The Ten Heavenly Stems”