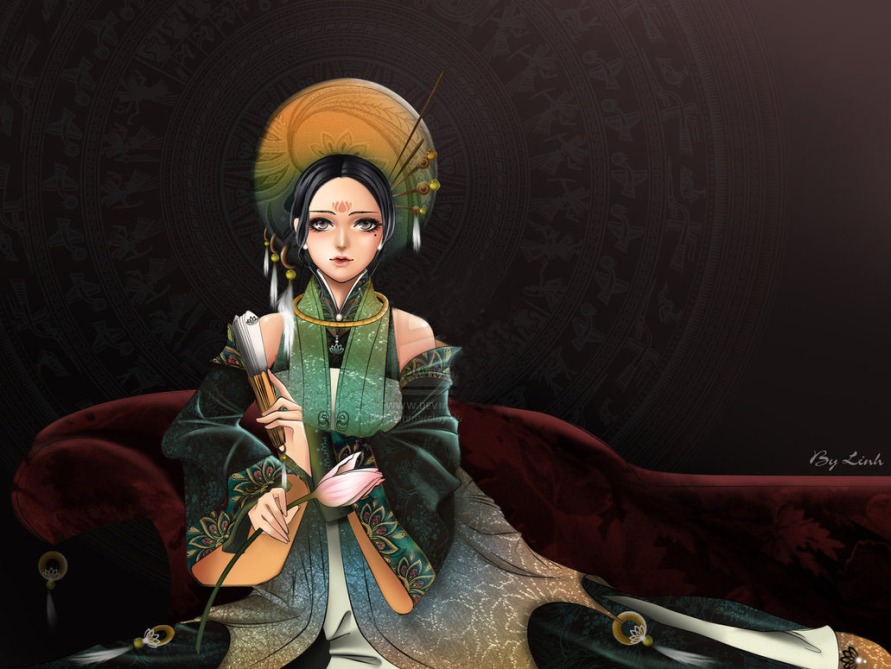 (Continued from Ancient Viet 4: Ties Between Taiwanese and Vietnamese)

We are an ancient people.

Việt history goes back far, far beyond what is the current accepted history of what Vietnam is suppose to be, spanning over four thousand years into the murky past.  Unfortunately, much of it was destroyed by the Han dynasty during the third (as well as the fourth) invasion and domination, which occurred in circa 186 AD, to be eventually replaced by Chinese customs and traditions.

But it wasn’t just the massive book burnings that occurred during that time.  There was also great bronze melting back in 42 AD, when all of the bronze drums that could be found were melted down and turned into a giant pillar with the words “Bronze Pillar Collapses, Giao Chi Destroyed”.  Since the drums had our history and writings imprinted on the bronze work itself, we lost much of our documented history.

That was a very hard century for us Vietnamese.  We lost most of our history, our culture, and our writing within the span of one-hundred years.  The Chinese imported their writing system into Vietnam to replace the writing system that was already there.  It was known as the Từ Hán-Việt 詞漢越 (Vietnamese Hanzi) and looks familiar to any Chinese literate because it was based from the Chinese characters.

Of course, circa two-hundred years ago, we lost even that vestige of writing to the French colonists who wholesale wiped out the Vietnamese written Từ Hán, to be replaced by what is now currently used as our national written language, Việt Ngữ which is basically the French alphabet, written in phonetics so that it can be vocally uttered without even the need to know what the words mean.

I found out how this worked to my advantage when, at the age of three, to the amazement of my mother, I started reading Vietnamese words right off of newspapers and magazines that my parents had around the house.  She could hear me read the words out loud, not knowing that I didn’t know what half the words meant.  She thought I was smart, but Ha!  I fooled her.  All I did was apply my understanding of what the letters were suppose to sound like when they were placed together.  Thinking that I was gifted in literature, she got me lots of things to read.

Funny thing is, the more I read, the more I learned, and the more I learned, the more vocabulary I gained just by seeing the same words over and over again, in different contexts.  By the time I was six, I had read every book in my house, including my parents’ novels and nonfiction books.  One of my favorite books belonging to my father was The Story of Helen Keller.  Another was Norman Vincent Peale’s You Can if You Think You Can.

Hardly the stuff that children would like to read, but at the time, kids stories bored me with their shallowness and their lack of substance.  I was only able to delve into children’s books when I came to the USA and found a completely new language that I could not understand.  Since I knew absolutely zero English at the time, I had to go back to the very start and relearn a whole new alphabet.  It took a couple of years, but once I figured out how the grammar structure was laid out, it was fairly smooth sailing.

Given my love of the written language, I would have given so much to be able to read in my people’s original ancient writings.  Good news is, a few exceptional works were buried deep underground, which saved them from being destroyed by the Han.  Various ancient artifacts called the Đông Sơn drums (I have detailed much about the drums in my recent post Đông Sơn Drums) were finally uncovered, one as recently as January of 2012, when an ancient bronze drum was uncovered by a farmer near Ru Than Mountain in Thanh Hoa Province.

We know what these drums look like because we have many many other surviving drums that have the same carvings on the tops and sides.  Here is Ngọc Lũ, a perfect, intact drum, dated to circa 2,500 years ago.

Here is the drum face, complete with the pictograms and symbols, some of which denote—you guessed it—a complex lunar calendar system of the ancient Việt.

The images on the calendar are fairly clean and simple.  There is much fascinating wisdom and knowledge buried within the pictures and symbols, but on the surface, it is a basic lunar calendar.

There are 354 days, divided into twelve months with six months having 29 days and six months having 30 days.  Within each five year periods, there are two years within that five year epoch that would have an extra month.  After the 18th year, and on the 19th year, the calendar reverts back to having 12 months.

If we look at the calendar face, it shows up as various animals and people.

Counting from the perimeter towards the center, the outermost ring of the calendar shows 18 Lạc birds with long beaks.  Each bird is a single year.

The next ring, going from outside towards the center, shows six chickens, ten deer, eight chickens, and ten deer.  There is a simple reason for these animals.  Chickens eat only during the day when there is no moon.  Deer eat only at night when there is a full moon.  Any month that starts with a chicken will have no moon at the start of the month.  There are six nights at the beginning of the month, from 1 to 6 when there is no moon.  There is also eight nights at the end of the month between 22 and 30 with no moon.  During these times, there should be no nightly hunting activities.  Any other times, when the moon shines bright at night, hunting can be organized.

The third ring shows six well-dressed royal members on each side of the circle, representing each month of the year.  There is a shorter royal member on one side, denoting the leap month to which an extra day must be added.

In the center, the rays of the sun or sunburst symbolizes day and night.  There are 14 rays (or nights) which land in between two days (those round sacs with the dots in the center).  It also denotes the six dragons of heaven (I wrote about the six dragons of heaven in an earlier posting) as well as a complete understanding of the Early I Ching diagram (I will be detailing this information in my next posting, as this post is getting rather too long).

This writing was everywhere.  It was found on various Đông Sơn artifacts including the famous drums, on cave walls, on over 200 Sapa boulders (which by the way, has traces of I Ching divinations similar to that found on oracle bones!), and of course on paper.  At the height of our ancient civilization, there were 74,988 books written in Văn Khoa Đẩu  from the library of Princess Phùng Vĩnh Hoa who lived during the times of the two Trưng sisters.  We know about these books because many of them were referred to by title from many other sources.

After the books had been burned and all those who were literate had been wiped out, it seemed a dark time indeed, and for a very long time, we lost our writing system.  We still had our spoken language, but our written language was gone.  Lucky for us, Princess Bình Dương, who was the daughter of King Lý Thái Tông, was one of a small group of people who still knew how to read and write in Văn Khoa Đẩu.  She single handedly kept the spark alive by writing in the script and then spreading the script outward to others.  (As an aside, I am starting to see a huge connection amongst the Việt women who lived in that turbulent time.  It is quite amazing to me to realize that the most powerful Việt people at that time were women!  Definitely, there will be more explorations of these ancient Việt Babes in future postings).

Since the script is a phonetic script, once we understand how the sounds are being recorded, we can literally read the script out loud and from the sound of the script, we can pick out the meaning of the words.  This was how I was able to read complex literature at such a young age.  I didn’t need to learn individual words, I only needed to learn the sounds that the groupings of letters made.

This script is being resurrected today by professor Lê Trọng Khánh, leader in the field of ancient Vietnamese writings.  This is of great interest to me because I would love to learn a new (old) language, especially if I can utilize it to rewrite some of the ancient Việt history using Văn Khoa Đẩu.  That would surely be a labor worth doing.

He was able to crack the codes of the language after intense study of the Sapa rocks of which only one boulder had anything that resembled words.

There were originally only 30 letters that could be deciphered, many of which were difficult to read due to the weathering of the rocks.  The letters to that rock in Sapa had these words written on them.  Công lao của tổ tiên đã xây dựng đất nước. Muôn đời sau con cháu phải bảo vệ lấy non sông của mình ~ Unknown Viet Ancestor  (translation:  Our ancestors have labored to build this land.  Future generations (you) must protect these lands of ours.)