When I was seven, I found out from my older sister’s science book that the solar system looks like this.

I thought to myself.  Ooooohhhh!  That’s awesome!  I was jealous because my science book didn’t have cool pictures like this.  All my science book had were pictures of katydids and stick bugs.  I read through the entire science text book in a matter of a couple of days hoping to find more interesting things.  I did learn about the nature of sunflowers following the sun around, and acorns which grew into acorn trees (but we have to call them oak trees to appease the indigenous population…I think…not sure).  I couldn’t wait to grow up and learn from the third grade science books.

As it turns out, this picture is all wrong any way.  I wasn’t missing much, that’s for sure.

When I was ten, I found out that the atom looked like this.

I found out that everything was made up of these atoms and the first thing I thought was, there’s so much space in between the nucleus and all the electrons.  How does it feel so solid when there is that much space?

As usual, I read through the entire book within a matter of days to see if I could find the answer to that and a host of other questions, and then spent the next ten months doodling on the edges making cartoons run around the pages as I’m flipping through them.  That’s what artists do when we’re bored.  We decorate our environment with our thoughts.

In this case, it was perfectly OK to draw all over the book.  This diagram is all wrong any way.

Fast-forward roughly ten years later and I’m flipping through a strange ancient text written by Hermes Trismegistus (aka his birth name Ningishzida) called The Emerald Tablet of Hermes Trismegistus.  It was an amazing text.  I was hooked on Hermes’ mind.  I thought he was the sexiest man alive (well…maybe not alive since he’s been dead for quite awhile).

Now, don’t get me wrong.  I’m no Hermetic Babe.  It’s not that I don’t believe that what the Hermetics believe is incorrect.  Au contraire!  I think his teachings are very valid, and as far as ancient knowledge goes, it is no secret that we are now barely rediscovering lost information from distant past.  I just happen to identify more with Taoism because I am Asian, and the most wonderful thing about Taoism is that it does not preclude my learning about the way from other sources.  There is much to learn from the Bible and the Koran and the Vedas.  There is also much to learn from the ancient texts of Egyptian and Sumerian tablets.  I dig them all.

So, back to the Emerald Tablet.

Due to the fact that it was written on a stone tablet, the work only had 14 lines.  However, those 14 lines are quite dense and takes awhile to digest.  Here is the Arabic translation, taken from the Kitab Sirr al-Khaliqa wa San`at al-Tabi`a (“Book of the Secret of Creation and the Art of Nature”), dated between 650 and 830 AD and attributed to Apollonius of Tyana.  This is as close as we mere mortals are going to get to the original text.

Immediately, several lines sprang up and grabbed me.  The first one is line 2:  What is the above is from the below and the below is from the above. The work of wonders is from One.  The next line which caught my eyes is line 10:  The formation of the microcosm is in accordance with the formation of the macrocosm.  There it is again!  Ningishzida had a tiny little tablet to write important stuff on, and this concept was so important that he wrote it twice!  Basically, what he’s telling us is that we only need to look at what’s around us to understand what’s above us.  All this sounds very similar to another famous quotation from the Christian Bible in the book of Matthew 6:10:  Let your will be done, as in heaven, so on earth.

So this is the big secret…so big that people have been killed to try and silence this knowledge.  Entire libraries are destroyed to keep this knowledge from being common-place.  Holy books are wholesale hacked and slashed to remove this information from the general public.  The secret is:  As above, so below.

Ancient Taoist Sages take this one step further.  Since humans are a part of the universe, what is inside of us is also mirrored above and below; therefore, As within, so without.   This knowledge has always been within us.  We just need to look within to find it.  Taoists of ancient times understood the microcosm of humans mirror the microcosm of atoms and the macrocosm of the universe.  Lao Tzu’s prescription for the remembering of the knowledge has always been to look within to understand the external world, both great and small.

Without going out the door, know the world
Without peering out the window, see the Heavenly Tao
The further one goes
The less on knows
Therefore the sage
Knows without going
Names without seeing
Achieves without striving.

So we look at the natural world and what do we see?  We see this: 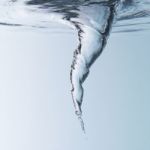 All the most powerful, most stable natural structures are vortexes.  So why would we think that our solar system would be a flat spinning plate?  Why would we think our atoms would be flat plates consisting of a nucleus and some electrons spinning around it?

It doesn’t.  We do not live in a two-dimensional world.  In fact, we live in a multi-dimensional world, but we can only see in 3D because of our perceived limitations.  Our 3D bodies do no preclude us from seeing vortexes in the natural world, so when a vortex occurs, we see them as tornadoes, hurricanes, flowers, seashells, even whole galaxies.  From the micro to the macro, they are all vortexes.

All of Life, which includes the Universe and all her suns, is a swirling vortex of energy.  From atoms to galaxies, everything is swirling and generating energy at the vortex of the spiral.  There is energy swirling all around us and within us.  We just need to figure out how to tap into this energy and reclaim our birthright.