My friend Connie’s tomato plants did not do well this year.  Spring came in rather chilly, and when summer arrived, it never got warm enough for the tomatoes to yield much fruit.  I would normally visit Connie’s house during the summer time and enjoy her sweet tangy tomato fruits sliced fresh with a touch of salt, or cut in juicy luscious chunks on beds of lettuce.  This year, however, the only fruits that her vines produced were tiny little green things that clung to life with desperate fingers, hoping to ripen enough before the frost set in.  I would be lucky to get even a single slice of this year’s spotty yield.  Surely, I thought, there must be a mistake.  Why has it been so unseasonably cold this year? 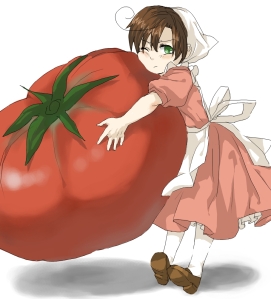 So I go to a trusted name in weather forecasting to see what the deuce is going on—Britain’s Met Office’s Hadley Centre for Climate Prediction and Research.  Mind you, the Met Office is not just any weather forecasting organization, it is the relentless champion of global warming.  I figured if anybody knew why the weather was so cold, it would be them.

Their answer was that they were going to scale back the degree of warming by about 20% from their earlier prediction of a global temperature rise all the way through to 2017.  This means that according to them, the peak of the warming trend was back in 1998, and ever since then, there’s been this strange plateau where there was no global warming at all, even though CO2 production was rising at a rapid pace around the world.

In the words of another respected scientific journal, Nature: “Despite a sustained production of anthropogenic greenhouse gases, the Earth’s mean near-surface temperature paused its rise during the 2000–2010 period.” [1]  In fact, not even the so-called ‘proxy’ sources such as tree rings, ice cores, ocean sediments, and stalagmites show any global warming since 1940 [2] (see graph).

These are three separate studies that have been printed in Nature, going from 1998 to the present time.  That’s over seven decades of predictions that hadn’t borne fruit, just like Connie’s tomato plants this year.

By rights, with the amount of industry going on since the turn of the 1900s, there should not be a dip in the numbers going across the board.  It should, in fact, be hockey-stick-like, and run away, upwards.  Instead, the results are plateauing, even going back down, especially within the last fifteen years.  Since (my) inquiring mind wanted to know what’s up with that, I went digging in my usual armchair scientific way.  Here’s what I found.

The Earth has a cycle of cooling/warming trends.  I did touch upon it in my previous post She Blows Hot and Cold, which is part of this grouping of exploratory global temperature postings.  Earth’s (and man’s) activities, from volcanic eruptions to axial shifting, to atmospheric conditions ABSOLUTELY affect global temperatures.  In fact, let me be real clear about this.  Changes in her condition will change global temperatures, there’s no doubt about that.

However, Earth is not the only mover and shaker on the block.  In fact, external sources account for at least some, if not a big chunk of the warming and cooling that occurs on Earth.  These sources which cause all the melodrama that’s been going on for all these billions of years, external AND internal, are all collectively called Climate Forcing.  NASA’s definition of climate forcing is “an imposed change of Earth’s energy balance, as may be caused, for example, by a change of the sun’s brightness or a human-made change of atmospheric CO2.” [3]

Sun’s brightness?  What the hell does that mean?

“Human activity and industrial discharges do have a great impact on environment, but forces of nature are far more powerful,” says Vladimir Kotlyakov, head of the Institute of Geography at the Russian Academy of Sciences.  He is talking about all the various other forces that are concurrently occurring alongside the human-generated CO2, most notably, the sun’s activities, and he is not the only scientist who is rethinking that CO2 is the only source to affect a global climate change scenario.

It is becoming more and more apparent that climate change is driven by events and activities greater than the small changes in the partial pressure of a trace gas.  Instead of relying on a single factor which would tip the scale of climate change, it is most likely going to happen due to a combination of factors that normally occur in random fashion, and out of phase with each other.  However, once these factors merge, major events occur.

It looks like I need to do me some talking to the sun.