Everything is a combination of philosophy and science.  Even boring things like eating an orange, or doing the laundry, result in reams and reams of mathematical equations and scientific theorems explaining the activities, all downloading through my eyes and into my brain.

And I’d be like…why?  I’ve had these philosci cram sessions in the past, and I know how it culminates.  It may make sense at the moment I’m getting the information, but I’m not gonna remember any of this when I wake up anyway, so why am I getting all this stored into my brain?

In fact, I even questioned him about its usefulness two nights ago, during a particularly frustrating lucid dream, when I was trying (and failing miserably) at riding a pogo stick, from an altitude of about half a mile up in the air.

I was also simultaneously trying to manage the download of equations explaining the mathematics behind riding a pogo stick—in midair!  On a jittery, unstable pogo stick!

I swear, my brain felt like it was going to melt with all those string equations.

Now, I call it a pogo stick because it looks like a pogo stick, with pedals where you put your feet on, and a long pole with handle bars but you don’t really jump up and down to get anywhere.  It just sorta surfs on the airwaves.

The handlebars are equipped with all these controls and blinking lights, but pushing them causes unexpected and crazy things to happen, so I tried not to push too many of those buttons at the same time.  It’s like trying to familiarize yourself with a video game joy stick when you don’t know what all the buttons do, except you’re up in the air and don’t want to cause too much mayhem by  pushing too many wrong combinations.

Since this was something that you use to ride, up in the sky, I had a momentary giggle when I realized that anyone on the ground, looking up, would think that I was a witch, riding a push broom, because it sorta kinda looks like it could be that, especially at night…and against a full moon, no less. 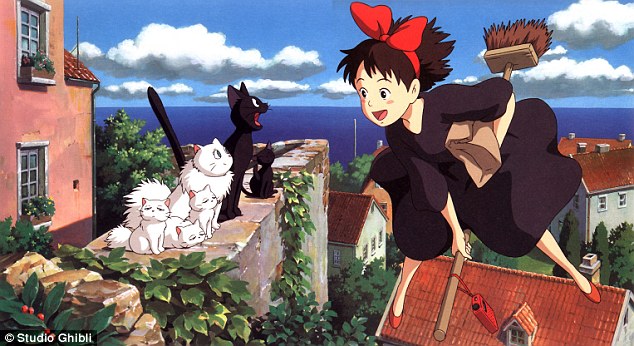 But I hasten to assure you that it is no push broom.  It’s basically just a simple mode of transportation that students and kids use to get around, similar to a student’s bicycle (as opposed to the space vehicles that the adults used).  However, much like the complexity of a bike, this pogo stick also isn’t as simple as it looks if you don’t know how to ride one, and I was botching it very badly.

Everyone else around me was surfing from cloud to cloud, and here I was, sinking lower every time I tried to make it bounce upwards.  Nothing I did was making it work.  I was starting to cry.

And then suddenly, some guy felt sorry for me and rode up behind me on his pogo stick.  He reached out, grabbed one of my handlebars, and shifted himself from his stick onto mine.  Suddenly, the pogo stick felt its controls being manipulated by expert hands.  It responded with joy, rising up into the bright azure sky and began flying with confident power.

My face cracked into a big smile.  This was fun!  I was jetting amongst the clouds!  Above me was blue sky.  Below me was blue ocean.  And behind me was an expert flyer, giving me a taste of how it felt to be able to utilize this pogo stick at its maximum potential.  It was an amazing feeling!

The guy stood behind me, on the pogo stick, and effectively flew the thing.  I could see where his fingers were placed as he pushed the combinations of buttons that allowed the pogo stick to move at his command.  Even his feet did things to the pedals, which I suddenly realized, also had controls that had to be worked.  In fact, your entire body had to work to make this thing fly right.  You don’t just stand there holding onto the handles and expect it to go anywhere.

‘Sure!’  I agreed immediately with a bright smile.  It was a lot more fun than struggling with this pogo stick on my own.

As soon as I agreed, he launched us off.  But then—I saw an image of myself splitting from me, and I could see my image self moving away with the guy, towards the distant clouds!  Only…I was still in the same spot, even as he and the-other-me wind surfed away.

It took me a few moments to realize that I was still there, and that something had happened to prevent me from leaving with him, almost as if it was a dimensional split at that fraction of time, whereby only a presence that looked like me left with him.  I was, however, still here, in this dimensional timeline.

In a panic, I pushed some buttons to try and remain aloft.  But the pogo stick did not respond to me and I began  sinking again, into the ocean below.

To be fair, it was a slow floating descent, since I could have just abandoned the pogo stick and float on the air by myself (kind of like walking instead of riding a bike…you’ll eventually get where you need to go, but much slower than biking).  However, I stuck with the pogo stick until I finally floated to the ocean’s surface.

As I landed, from the periphery of my vision, I saw someone speed past me, holding onto something dark and long.  It was a wind tunnel, made of some dark grey lightweight fabric, and I suddenly found myself inside the moving wind tunnel.  I could feel the wind rushing through the fabric of the tunnel, and I laughed because it looked so cool.

Then I heard a deep, reverberating voice:

And as the wind tunnel moved around me, I emerged from its tail end into another realm.

And then I woke up.

But that was two nights ago.

Since then, I’ve had more of those dreams where nothing interesting happened except for more philosci downloads.

And then, last night, I finally got a more interesting dream.  I’ll tell you about it as soon as I get some dinner.