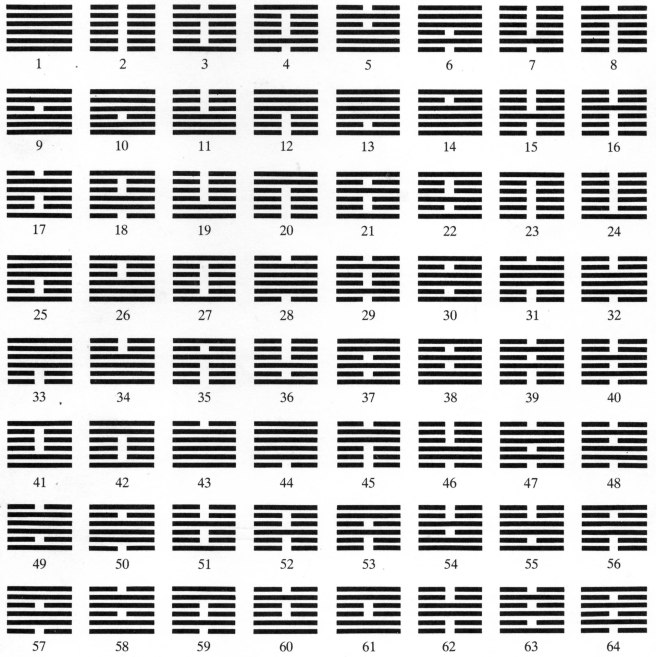 Traditionally it was believed that the principles of the I Ching originated with the mythical Fu Xi (伏羲 Fú Xī). In this respect he is seen as an early culture hero, one of the earliest legendary rulers of China (traditional dates 2800 BCE-2737 BCE), reputed to have had the 8 trigrams (八卦 bā gùa) revealed to him supernaturally. By the time of the legendary Yu (禹 Yǔ) 2194 BCE–2149 BCE, the trigrams had supposedly been developed into 64 hexagrams (六十四卦 lìu shí­ sì gùa), which were recorded in the scripture Lian Shan (《連山》 Lián Shān; also called Lian Shan Yi). Lian Shan, meaning “continuous mountains” in Chinese, begins with the hexagram Bound (艮 gèn), which depicts a mountain (¦¦|) mounting on another and is believed to be the origin of the scripture’s name.

After the traditionally recorded Xia Dynasty was overthrown by the Shang Dynasty, the hexagrams are said to have been re-deduced to form Gui Cang (《歸藏》 Gūi Cáng; also called Gui Cang Yi), and the hexagram Field (坤 kūn) became the first hexagram. Gui Cang may be literally translated into “return and be contained”, which refers to earth as the first hexagram itself indicates. At the time of Shang’s last king, Zhou Wang, King Wen of Zhou is said to have deduced the hexagram and discovered that the hexagrams beginning with Force (乾 qián) revealed the rise of Zhou. He then gave each hexagram a description regarding its own nature, thus Gua Ci (卦辭 guà cí, “Explanation of Hexagrams”).

When King Wu of Zhou, son of King Wen, toppled the Shang Dynasty, his brother Zhou Gong Dan is said to have created Yao Ci (爻辭 yáo cí, “Explanation of Horizontal Lines”) to clarify the significance of each horizontal line in each hexagram. It was not until then that the whole context of I Ching was understood. Its philosophy heavily influenced the literature and government administration of the Zhou Dynasty (1122 BCE – 256 BCE).

Later, during the time of Spring and Autumn (722 BCE – 481 BCE), Confucius is traditionally said to have written the Shi Yi (十翼 shí yì, “Ten Wings”), a group of commentaries on the I Ching. By the time of Han Wu Di (漢武帝 Hàn Wǔ Dì) of the Western Han Dynasty (circa 200 BCE), Shi Yi was often called Yi Zhuan (易傳 yì zhùan, “Commentary on the I Ching”), and together with the I Ching they composed Zhou Yi (周易 zhōu yì, “Changes of Zhou”). All later texts about Zhou Yi were explanations only, due to the classic’s deep meaning.

In the past 50 years a “Modernist” history of the I Ching has been emerging, based on context criticism and research into Shang and Zhou dynasty oracle bones, as well as Zhou bronze inscriptions and other sources (see below). These reconstructions are dealt with in a growing number of books, such as The Mandate of Heaven: Hidden History in the I Ching, by S. J. Marshall, and Richard Rutt’s Zhouyi: The Book of Changes, (see References, below).

Scholarly works dealing with the new view of the Book of Changes include doctoral dissertations by Richard Kunst and Edward Shaughnessy and a 2008 study by Richard J. Smith. These and other scholars have been helped immensely by the discovery, in the 1970s, by Chinese archaeologists, of intact Han dynasty era tombs in Mawangdui near Changsha, Hunan province. One of the tombs contained more or less complete 2nd century BC texts of the I Ching, the Dao De Jing and other works, which are mostly similar yet in some ways diverge significantly from the “received”, or traditional, texts preserved historically.

The tomb texts include additional commentaries on the I Ching, previously unknown, and apparently attributed to Confucius. All of the Mawangdui texts are many centuries older than the earliest known attestations of the texts in question. When talking about the evolution of the Book of Changes, therefore, the Modernists contend that it is important to distinguish between the traditional history assigned to texts such as the I Ching (felt to be anachronistic by the Modernists), assignations in commentaries which have themselves been canonized over the centuries along with their subjects, and the more recent scholarly history aided by modern linguistic textual criticism and archaeology.

Many hold that these perspectives are not necessarily mutually exclusive, but, for instance, many Modernist scholars doubt the actual existence of Fuxi, or think Confucius had nothing to do with the Book of Changes, and contend that the hexagrams came before the trigrams. Modern scholarship comparing poetic usage and formulaic phrasing in this book with that in ancient bronze inscriptions has shown that the text cannot be attributed to King Wen or Zhou Gong, and that it likely was not compiled until the late Western Zhou, perhaps ca. the late 9th century BC.

Rather than being the work of one or several legendary or historical figures, the core divinatory text is now thought to be an accretion of Western Zhou divinatory concepts. As for the Shi Yi commentaries traditionally attributed to Confucius, scholars from the time of the 11th century A.D. scholar Ouyang Xiu onward have doubted this, based on textual analysis, and modern scholars date most of them to the late Warring States period (403/475 BC-256/221 BC), with some sections perhaps being as late as the Western Han period (206 BC-220 AD).

One thought on “I Ching Hexagrams”