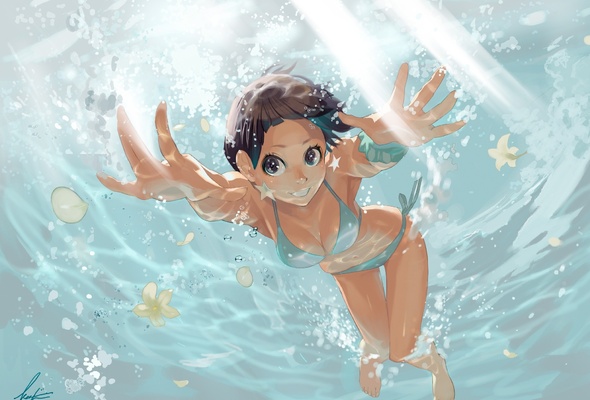 I love the mysteries of long-lost and hidden civilizations.  They fascinate me to no end and leave my imagination bursting with a million stories that want to be told about the people and places that used to be above water.

Many submerged cities are quite young.  They are fascinating because we know so much about them and yet, they still retain their mysterious allure.  Some, however, are very old—so old that no one knows how old they are.  When traditional dating methods are used, the dates that do come back put those places at a period of time that archaeologists have previously determined that there is no civilization advanced enough to have developed technologies that could create such magnificent structures.

This brings about a couple of interesting questions.  If, as they say, carbon dating is suspect and unreliable as a dating method, why would it only be ‘unreliable’ and ‘suspect’ for certain findings and absolutely reliable for other findings?  Why would all these sunken places also show that they were above water before the end of the last ice age?  Could it be that continent-wide drownings have occurred all over the globe at about the same time?  Might it be that the same catastrophic event(s) caused the sudden ending of the ice age, to herald in the new interglacial age?

In any case, it is a mystery, and I for one, love mysteries.  Since we have only managed to study only about 2 or 3 percent of the Earth’s oceans, I am confident that as knowledge is brought forth, we will be able to find more mysteries to contemplate.   Here then, are a few of my favorite mysterious drowned cities:

Yonaguni is a sunken structure that was found by a diver back in 1985.  Its placement on the map shows that it used to be part of a huge coastal area that joined Japan and Taiwan to the main Asian continental plate.  It was above water during the period of time that Sundaland was above water and would have been prime coastal real estate for the population that was living there.

Once the third event of polar cap melting, circa 7,000 years ago, all of this land was submerged and Yonaguni, along with the inhabitants of this Asian coastal area was drowned.  This means that the time frame of the last Global Glacial Maximum (the time when maximum amount of submerged land would still be above water) would have occurred as early as 23,000 BC or as late as 19,000 BC.  It was then that global sea levels would have been at the lowest, and the more accurate dating for Yonaguni would be within this time frame.

Ever since the rediscovery of Yonaguni, there has been intense controversy.  Some geologists and archaeologists say that it is man-made because they found, not only hewn marks on the stones but also the tools that created those marks, along with various carvings which have been recovered from the site.

Looking at the carvings that came out of Yonaguni, my untrained eyes say that they look like the work of humans.  Add to that the hewn marks found on the stones and I would have to concede that human hands shaped those stone steps.

The wide terraces, ramps, and large steps have a regularity to them and the straight and intersecting lines indicate non-natural formations.

Most striking is the large head which seems to have hair and a head dress carved to its head.  There are also numerous round holes carved into the rock which suggests areas where poles can be fitted into.

Dr Schoch, an American geologist who made the dive to inspect Yonaguni in 1999 states that “We should also consider the possibility that the Yonaguni Monument is fundamentally a natural structure that was utilized, enhanced, and modified by humans in ancient times.”

If, as Dr. Schoch speculates, the site dates to approximately 23,000 BC or as late as 19,000 BC, and there were human hands that were doing the enhancing and modifying of this natural structure, the question must be asked.  Who were these humans?

I really love old tales about ancient places that the gods have built because it evokes a time when magic and other incredible events occurred—a time when people still believed in the mystical and the magical.  Dvārakā was such a mythical city that a mythical god named Lord Krishna was supposed to have built off the coast of India some 9,000 years ago.

Unlike most other sunken cities and sites, Lord Krishna’s city had been recorded in great detail, much like Homer’s lost city of Atlantis.  This history, written into the Mahabaharata was thought to be myth because, of course, holy scriptures are only made-up stories of gods and men and can’t possibly contain any factual truths.  Flying crafts with the ability to shoot at each other from the skies?  Come on.  Gods who can destroy three cities with a single atomic blast each?  What utter nonsense. 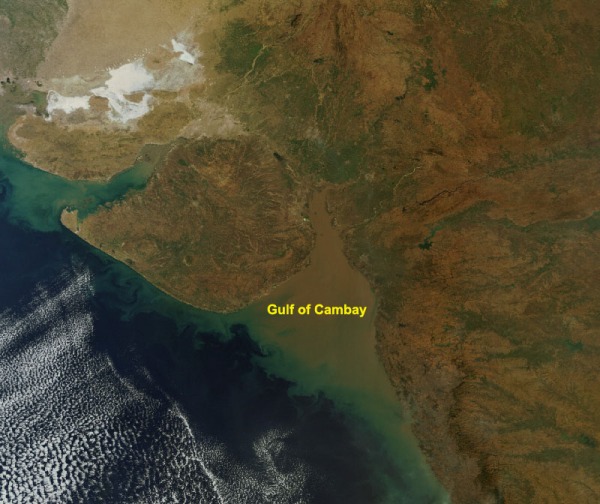 Well, at least some of the ‘nonsense’ has proven to be true and Dvārakā has been found—unlike Atlantis, which is still missing.

Back in 2000, a team of oceanographers from India’s National Institute of Ocean Technology was conducting a survey of pollution off the Gulf of Cambay when their side-scan sonars sent back images of huge geometric structures at a depth of 120 feet.

In clear water, this is not that far down, but either the water is so murky and polluted, it was difficult to get clear pictures of the place OR something has been suppressed due to sensitivity of the material.  Whatever the case may be, it is difficult to find any clear images of the city at all, even twelve years after the initial finding of the site.

Here is an account from the Mahabharata about Lord Krishna’s drowned city of Dvārakā:

…imposed on it by nature. The sea rushed into the city. It coursed through the streets of the beautiful city. The sea covered up everything in the city. I saw the beautiful buildings becoming submerged one by one. In a matter of a few moments it was all over. The sea had now become as placid as a lake. There was no trace of the city. Dwaraka was just a name; just a memory.

The Vishnu Purana also mentions the submersion of Dvārakā, stating:

On the same day that Krishna departed from the earth the powerful dark-bodied Kali Age descended. The oceans rose and submerged the whole of Dwarka.

This site is inextricably linked to Yonaguni because both sites have been carbon-dated it at roughly the same time period, circa 9500 to 7500 years ago which is roughly around 7500 to 5500 years BC.  Unfortunately, due to the methods of recovery (dredging) of some of the artifacts, the dating of the site remains contentious.  The answer to that is obvious.  More study and research needs to be carried out on this and other submerged areas of possible submerged civilizations.

There has not been any recent archaeological examination of the site since 2002 so we will not be able to ascertain for certain what, if any, truth can be extracted from this site.  The only way to prove the existence of Lord Krishna’s city is to go back and study it more carefully, along with archaeologists who are trained at the recovery and dating process.  I am sure that in a country of billions, we can find a group of archaeologists who would want to ascertain whether or not this is the actual city of Lord Krishna or just some natural land ridges made by ocean currents and whatnot.

Around the same time that the Indian Oceanographers stumbled upon Lord Krishna’s sunken city, another discovery was being made off the coast of Cuba.  This story has even less information and less research than the previous two sunken cities due to the sensitive nature of its location.  However, this is the extent of what little data was able to surface from the findings back in 2000.

An oceanographer and engineer Paulina Zelitsky, and her husband, Paul Weinzweig, head of Advanced Digital Communications International, Inc, stumbled upon a structure while doing some deep ocean bottom surveys in and around the Gulf of Mexico and the Caribbean.

What they found were megalithic structures made from polished granite, a stone that could not possibly be of local origin because that entire ocean floor is made up of fractured limestone.

The closest source of granite would have been at the center of Mexico so the source of the granite for these structures are unknown.

In addition to the granite features, the oceanographer was able to recover two rock fragments from within one of the features, one of them a type of volcaniclastic sandstone and the other, a carbonate breccia.  Both rocks are ancient and unrelated to the composition of the granite megaliths. How these rocks reached the area of the megaliths is also not yet understood.

There was ancient writing on these structures, hieroglyphic-like, which scientists are still trying to decipher.  The ancient inscriptions were found carved into the rock surfaces everywhere.  The ample evidence on the ocean floor showed various structures aside from the pyramids.  There were buildings and roads paved with stone; the size of this city was so large that it went from coast to coast.

There were also symbols similar to the American cross, of ovals crossing each other, such as those that can be found in Cuban caves.  These circles are found all over Cuban caves which also depict other circles and whorls.

Coastal Cuba is not known for being an open area for research and study, but more importantly, this area, so close to the Florida keys, have been extensively studied by the US military since the early 60s.  Nuclear submarines cruising around that area back then had discovered the location of this submerged megalithic city and immediately shut everything down.

That was forty years ago, however, when the world was still mired in a cold war against each other.  Today, the threat of a Cuban offensive is just about nonexistent.  Trade sanctions with Cuba has also somewhat eased and may soon be fairly normalized.  Once that occurs, there is hope that more unrestricted archaeological, geological, and paleontological studies can be carried out to further understand the science behind the anomalies.

At the very least, there should be some type of declassification to further the understanding of ancient civilizations and early human history.  Until then, all we can do is gaze upon these structures and speculate on how wondrous our past must have been and if we will ever return to such a state of advanced understanding.

4 thoughts on “Ancient Drowned Cities of the World”